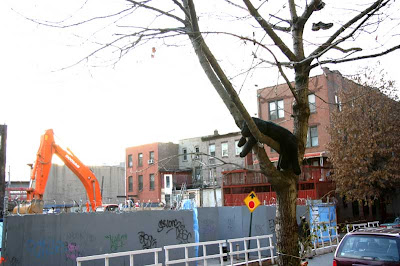 Apparently, panthers striking from the trees
are not the only menace lurking on South 4th Street...

So the other day I burst out of the door to my apartment building in my usual bat-out-of-Hell way. I’m always in a hurry.

Out of nowhere, who plain clothes police officers told me to stop right away and keep my hands away from my pockets. This was the second time this has happened and I was annoyed. But I rarely lose my cool. Especially when the other guy has a gun.

"You must be joking," is what I said and it made them laugh.

They weren't joking though and began right away with questions like, "Are you carrying anything you shouldn't?"

"We're looking for someone who lives in 6R. How long has it been since you were incarcerated?"

It went on like that even after they had established that I wasn’t the guy they were looking for and was totally minding my own business. The whole Civil-Rights thing bothered me a little bit but what really got me was the incompetence. They had to have known that I wasn’t their suspect (my driver’s license said so) yet they kept trying to trip me up with leading questions. I understand that they have a difficult job but they could have made it easier by asking questions like:

"Ever see any suspicious activity?"

"Have you seen so-and-so lately?"

But they never did.

Finally, in lieu of apology they told me that they get a lot of complaints about drugs in a certain apartment (not mine) and that I should be careful since it's a dangerous neighborhood.

Really? News to me.

Actually, the Civil Rights part does bother me alot, but not because I feel targeted. I just had a tiny two incidents of stop-and-frisks because I dress scruffy and am always in a hurry. I guess that puts me into some kind of profile. But what if I were black? Let’s be real here: it would happen all the time. So I’m not sure if the cops were a) incompetent, b) sadistic, c) trying to find some white guys to harass so they could harass black guys more often.

None of those possibilities inspires confidence...
Posted by citymouse at 9:41 PM