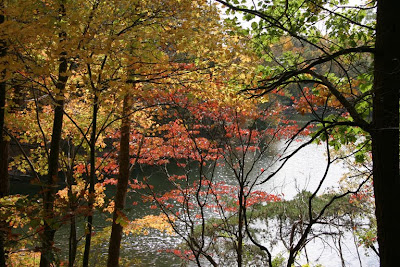 Countrymouse in Paradise at the Ragged Mountain Reservoir.

A whirlwind trip down to Virginia.

Those less-than-two days were packed with Autumn delights. I carved a pumpkin with a five-year-old--does it get any better than that? I raked leaves, which the same child was only too happy to “smush down.” We hiked through a golden wood and alongside sparkling waters under a pure blue sky. I slept for two nights in my own bed, under my own roof, with my own sweetheart; and it was wonderful. I was like a prisoner on furlough, the kind where he’s sent home for the weekend to breed, except my life in New York is not a prison and I'm no Willie Horton.

More like an exile. (Does that mean that Meredith is under house arrest?)

In a way, it was an example of how lucky I am. I worked like crazy all week in a job that is exhausting but quite interesting. Then I go home and someone paints the mountains all crazy colors and puts pumpkins on all the porches and a smell of autumn on the wind. The art direction was perfect, and everyone was gad to see me.

We were all sad when it was time for me to get back on the bus and head back up to the granite island. It’s fun but I’ll be glad to go back to having just one life at a time.
Posted by countrymouse at 8:01 PM

Kerosene in a Tin Cup 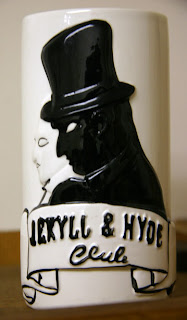 I've spilt gallons of ink in my journal intime trying to understand the attraction I feel to explore the darker parts of my nature. I try to keep that stuff out of my blog because I have a squeaky-clean image to maintain. Still, this one bit seemed worth sharing. Don't worry: no shocking revelations here.

When I talk about the darker parts of my nature, I'm mostly thinking about the compulsions we all feel to do things that are obviously self-destructive. Why drink too much? Why not sleep enough? Why say foolish things that we know will rebound to hurt us in the end? I want to understand the devil that makes me do these things so I can beat it.

I had a little revelation while I was swimming the other day so I paused to write it down:

Brooklyn, October 21
So I'm starting to understand my desire to flirt with the dark side. It's about proving one' fortitude--mostly to oneself. In this book I'm reading (The Third Chimpanzee), Jared Diamond describes a Kung Fu challenge of drinking Kerosene. Quite impressive to your adversaries if you survive to kick their @$$ with that handicap. There's a ritual version of it but the masters also do it when no one is around. Who are they trying to impress? There can only be one answer...

Posted by citymouse at 7:28 PM 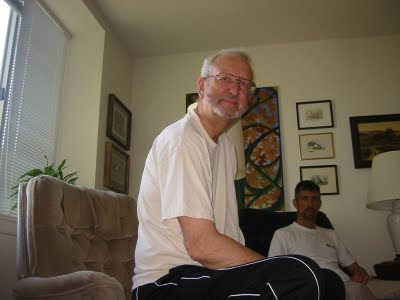 Here's a picture Sebastian caught of my dad and me--and an early tree painting. He was four at the time.

It's difficult being away from Sebastian. This has been a good trip so far, but saying goodbye to him only gets harder. And he's starting to suffer a little bit too.

This past weekend, I met Meredith and him at my parents' house near Washington, DC. While we were there my dad told me that he had to spend a year away from my mom and my two sisters (I was not born yet) while he completed his graduate studies in Saint Louis. Our little struggles are familiar to many, maybe even universal.

That made me feel better. I really respect my dad and it was a great message because it combined sympathy and a gentle reminder that I wouldn't lose Sebastian while I'm away.

To comfort me just a little more on my return to New York, he sent me off with pancakes he had made, each wrapped in wax paper and packed in groups of four into sandwich bags.

Monday morning, I threw those puppies on the griddle and thought about my dad as I had breakfast. 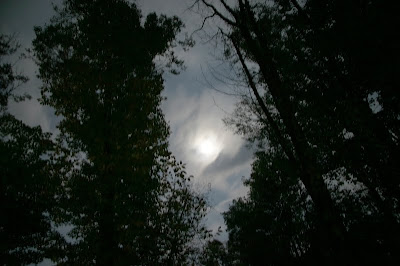 Enormous thanks to my friend Daphne for letting us stay in her beautiful home, and for providing the porch from which to watch this moonrise. [Photo Gallery]

Last weekend I took a roadtrip with my friend Rachel up the Hudson Valley. Proximity to this magical region is among the greatest pleasures of living in New York City, and one that I will miss the most. It’s also one that is easily neglected in the frenetic life of the City. That feeling of liberation is exactly what makes such a trip so wonderful yet the rush of the City is like the emotional kind of addiction. It seems impossible to simply step away, even for a weekend.

We wrenched ourselves out of the rat race and scurried up the Through Way to the Rondout Valley, between the Gunks and the Catskills and across the Reservoir from Woodstock. That whole mid-Hudson region is a treasure with formidable natural beauty--strange geology, folded glades, mossy rock formations, abundant clean streams, dark woods, and surrounding mountains.

Nature has reclaimed the Nineteenth Century’s crumbling infrastructure (railways, canals, docklands, quarries, millworks, tanneries, and on and on), which adds a whole lot of romance and moss-covered mythical quality. The Hudson River School predisposed us to that way of seeing the world and a veritable army of well-funded conservationists and preservationists have locked it in for us and many future generations of travelers and pilgrims.

Many places are beautiful but the Hudson Valley also happens to be blessed with an absurd cultural abundance as well. There are countless art centers, drama troupes, and musical venues. With just a short two days to explore, Rachel and I focused on the Art of Living and just two towns: one small (Hudson) and one tiny (High Falls).

We walked from shop to shop, each full of beautiful things and so tastefully curated. Not everything will appeal to every eye (although most of it looked good to me). The quality and coherence of the selections were undeniable. I am no materialist but I could really do some damage in the majority of those shops, armed with the right expense account.

High Falls, with a population of about 37 has half a dozen furnishing stores that I could only call top-shelf in terms of quality, though not necessarily price. Our favorite was a slightly-hidden gem called Spruce. Turns out the proprietor lives in Greenpoint. Only figures, right?

The City of Hudson flows down the east side of the Hudson Valley from Olana to the Rip Van Winkle Bridge. The downtown, which must have at one time been devastated by job flight has become a gauntlet of antique stores in lovingly restored storefronts, bank branches, movie, theaters, soda fountains, and other Rockwellesque settings. Surprisingly enough, it seems really cool. There wasn’t any of kitsch, schlock, sentimentalism or cloying tchotchkism you would expect in such a place. Nor was there a smell of decay or feeling of decrepitude. Whoever is doing their scouting and buying has some serious eyes and it’s very consistent from one place to the next.

Again, an expense account would be nice up there as some of the shops are a tad pricey but not outrageous. The merchants were super-friendly, knowledgeable and eager to deal. It couldn’t feel more different than East Hampton, for example, or Santa Fe. It’s a fun, friendly place, not annoying at all and well worth a trip. Even I did not escape empty-handed: I found a nice mirror in great condition at a very fair price; and of course a bag of apples.

We finished our visit with a two-hour ride down the Taconic, with the perfect autumnal lighting of late afternoon. My friend Daphne calls it “the Magic Time.”