The Flow is about to Flip

Westbound traffic on Monticello Road will be routed to the left onto Levy. Eastbound traffic coming from Graves and the Bridge PAI will need to make this hairpin turn on to Levy. My solution would allow them to continue to Rialto or some easier turns than this.

The pilot project to reverse the direction of the westernmost block of Monticello Road starts Sat. October 5 with a 1-hour trial. If that doesn’t cause too much pandemonium, there will be a longer [short-term] trial. I will be interested to see how it goes.

Logistical details and the rationale here.

This is happening because the new Belmont Bridge design will not permit left turns out of Graves Street onto 7th Street/Avon at Quality Pie. Without this change, all else remaining the same, residents and visitors will need to either drive under the bridge (private road, which will be closed during portions of construction) or via a winding half-mile detour to Goodman.

I reported on the plan in detail last year and I analyzed the issue in a bit more detail than I will here.

As did Elliot Robinson

I did not agree with the decision to eliminate the left turn out of Graves—it seemed like a solution without a problem. If we accept that decision as a done deal (and I think it is) then something needs to change and this could be workable solution, worth a try. Not everyone agrees with it, but there was also opposition to the Downtown Belmont sidewalk enhancements, which have been a big success. Engineering brief | Oral History

My preference would be for the one-way portion of Monticello Road to be reconfigured as a yield-street where all users share a narrow road in both directions and occasionally need to move over and wait a moment to let each other pass. It may seem strange but this type of street is among the safest for all users because it forces people to drive slowly (As they always should on a residential street). They exist all over the world, including, it must be noted, the rest of Monticello Road, which operates in that manner (in practice if not in theory).

This western portion of the road is slightly narrower than the rest of the historic and naturally speed-controlled byway butw what really makes this stretch different is the preponderance of parking. Let's be real though: most spaces are used by commuters seeking free spots, restaurant-goers, and employees. Some of this would need to be eliminated but it would be interesting to do a full count and measurement to see whether the concept could work if only residents are accommodated. I’ll do that soon if I get a chance. Email me if you would be interested in helping with this project.

In the meantime, I support the idea of the pilot as a low-cost, low-commitment way to try something new. If it doesn’t work, no harm done and we switch it back. But we should encourage traffic engineers to try new things. Monticello Road is one of the oldest and most interesting streets in the region. A big part of that is because its quirks force people to acknowledge and accommodate one another. And the mix of preservation and experimentation is what makes Belmont fun.
Posted by Peter at 10:21 AM 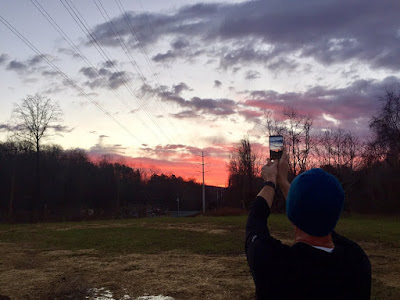