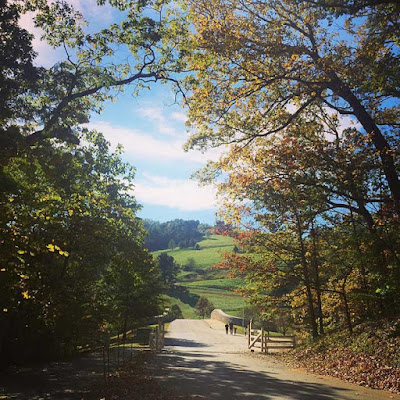 This is the executive summary of a 50-page pre-assessment report I wrote about reconnecting Charlottesville to Monticello and beyond for pedestrians and cyclists. That document is the result of an independent a study course at the University of Virginia's Masters of Urban and Environmental Planning program. The next phase will be an in-depth practicum in which I will be joined by four other graduate students. We will delve with greater detail into the issues identified in this report. That will be available in the late spring/ early summer. -Peter Krebs

Monticello is an important source of Charlottesville’s history, cultural identity and economic vitality. In combination with the Academical Village at the University of Virginia it is a nearly unmatched resource and very unusual for a town of this size. Monticello is close to the city (its lands are less than a mile from the border) and it is visible from many locations, yet it is difficult to get there without a car. This discontinuity poses problems of equity and unrealized opportunity for Monticello, the city and the region.

Monticello was once easily accessible. There were multiple routes into town with significant travel and exchange in both directions. When Interstate 64 was built (in the 1960’s and 70’s) all of those routes were severed except for one (VA-20) and that was widened for highway speeds without accommodation for bicycles or pedestrians, effectively cutting Monticello off from those who do not have—or choose to use—a car.[1] There is no transit connection, which limits residents and visitors alike.

The Thomas Jefferson Foundation, which owns and operates Monticello and much of the surrounding lands, bridged half the distance in 2000 by opening Saunders Monticello Trail. This winding two-mile pathway is fully ADA accessible (while climbing a mountain!) and its beauty attracts tremendously diverse visitorship. Combined with the adjoining parkland, it is a wildly successful landscape and a destination in its own right yet it is difficult to get there with a vehicle and nearly impossible without one. 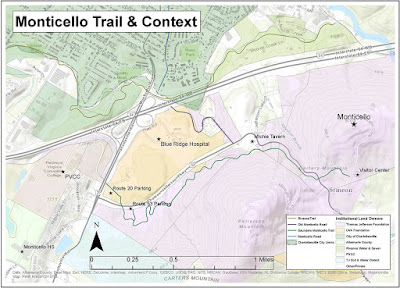 The core of the study area, showing roads, parcels and institutional landowners.

The remaining gap, subject of this study, is small but complicated. The highway itself is a formidable physical and psychological barrier.[2]  The zone is split between two jurisdictions (Charlottesville and Albemarle County) with a third (Virginia Department of Transportation) in between. There are multiple institutional landowners as well, most of whom would like to solve the problem but none able to tackle it alone. A collaborative process will be required.

Both the City and County’s Comprehensive Plans mention Monticello connectivity or show it on their maps but they are not coordinated. Additionally, Morven has begun a study for a trail from its vast and historically significant lands south of town, through James Monroe’s Highland to Monticello.[3] The regional Thomas Jefferson Planning District Commission (TJPDC) has begun a decennial revision of its 2004 Jefferson Area Bike and Pedestrian Plan and this segment will be a crucial part of it. As part of that process, the TJPDC is sponsoring a spring study by Masters students (including myself) from University of Virginia’s department of Urban and Environmental Planning. We will provide research support.

This document provides background for the Monticello Connectivity portion of that work by identifying key stakeholders and issues, and examining the overlapping spatial factors such as jurisdiction, land tenure and legacy infrastructure that make this problem complicated. It evaluates the current planning environment to determine whether a collaborative approach is likely to succeed. 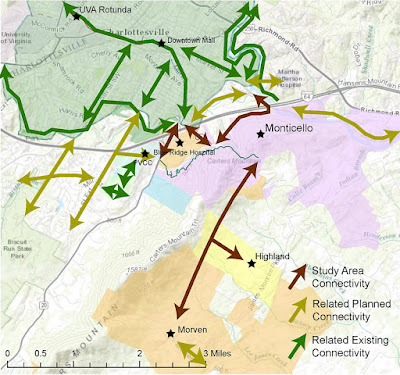 Connectivities within and related to the study area.

Here are some key findings, several of which will be investigation topics for the practicum group:
This will not be a typical amenity or recreational trail. It is a connection between two halves of a UNESCO World Heritage site; a region and the full telling of its history; a community and a vast zone of ecological and cultural discovery. There are challenges but very high and very likely rewards. It is an exciting project and an opportunity to model a better collaborative approach between neighboring localities, governments and foundations to unlock a shared opportunity.

The situation is ripe for a collaborative master planning process to proceed.

1. That segment is part of National Bike Route 76, notwithstanding its unsuitability.

2. I theorize a nexus between these three forces—physical, psychological and procedural—that causes them to mutually self-reinforce to make simple problems more challenging

3. The University of Virginia Foundation owns Morven as it does the Blue Ridge Sanitarium site, which occupies much of the land between Charlottesville and the Saunders Trail.