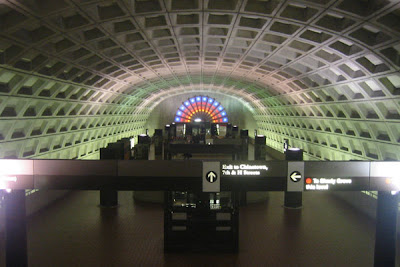 So psyched to be back in DC... People are politically aware,
the place is so spacious and clean... and I'm a step faster
than everyone else... (-citymouse)

I’m writing this on a New Century "Dragon" bus to DC. I’m going there for a few meetings, to see a few friends, and to see some shows. I want to see the Hopper show (one of my earliest faves) at the National Gallery and the Hudson River School at the newly-renovated National Museum of American Art. My work is a direct descendant from the American Romantics who sought the face of God in Nature. John describes my naturalism as "mediated," which is spot-on and very much in the same spirit as Durand and company. I’ll stop at the Corcoran to see the Ansel Adams show (for reasons which should now be obvious) and for the ultimate purpose of my trip, to see Jeremy Blake’s retrospective. This will be a sort of pilgrimage and a chance to pay my last respects.

So this trip is about more than seeing art. It’s about clearing my head and Art’s healing powers. Big respect to Meredith for her understanding and allowing me a few days away for this restorative. Big thanks to Evelyn for letting me crash in her posh hotel room.
Today is the 3rd of January, and the Iowa caucus is the opening shot of what looks to be the most lively election season in recent memory. The stakes are huge: America stands at a potential turning point...or we could let the moment slip away into hopelessness, depending on whether we are guided by our aspirations or our fears.
A side note while we’re on the subject of popular democracy. I’m sitting in the back of the bus because I was late and that’s all that was left. It kind of sucks (no light and right next to the bathroom) but it’s not the end of the world. What I find very striking is that I’m the only white person in the back third of the bus. Everyone else is black. The front two-thirds are mostly Chinese, with some white people mixed in.
Now maybe the Chinese are familiar enough with the bus to know that they should arrive early (as I clearly did not). It’s crowded up there and maybe the Chinese are used to having billions of people around. Most folks back here are stretched out snoozing (though it’s not yet 8:00). Maybe blacks (and artists) just want more space or are more used to bathroom smells.
But I do find it interesting—from a purely observational perspective—that the bus-riding patterns are so similar to what they were in Rosa Parks’ day. Now people may have options that they did not have before, but does everyone actually live better than they did back then? Certainly, in many ways. But in many ways, I think not.
Postscript: When the bus stopped in Washington, all the sleepy black people stayed onboard, continuing on to Richmond. That explains why they were in the back... easier to get some shut-eye on a long trip. Or perhaps not...
One more thing, not unrelated to race. It's immediately clear: DC is Barack country. The metro was alive with chatter about his strong victory in Iowa. 49 more states to go!
Posted by countrymouse at 9:28 AM