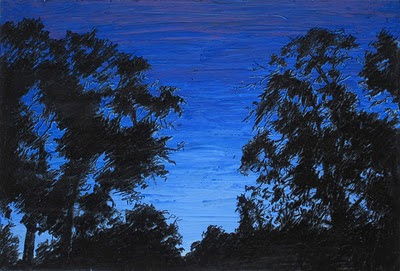 When I was first getting started as an artist I planned to donate a sculpture to an auction to benefit the homeless of Washington, DC. Unable to decide which piece to give, I asked one of my mentors for advice. His response: “Give your best piece.” It’s always hard for an artist to give up their work, so the idea of giving away my favorite was a bitter pill to swallow.

He was right though: it’s only a donation if the piece actually sells. So if you wish to benefit a cause, you need to make the sacrifice and anyway the business reasons for making the donation redound the most if you put your absolute best foot forward. The desirable audience that attends the gala is impressed with your strong work and the art shows—and moves—well. Everyone comes away happy.

I took his advice and the piece sold and I gained a new patron as well as good karma and a tax deduction; an example of doing well by doing good.

I have that advice in mind as I prepare for this weekend’s Wet Paint gala to benefit the Virginia Center for the Creative Arts (VCCA). VCCA is one of the nation’s most established artist communities and a beacon for the visual arts in Central Virginia. Like so many other artists, VCCA holds a special place in my heart and I made some of my best work while I was there. Much that I have done since was inspired by that magical place.

I wanted to contribute something worthy that would be a response to my residency there. I am proud of the result and you can see it this Saturday night. Buy a ticket, make a bid. The cause is more than worthy and hopefully you’ll walk away with an important and resonant work of art. 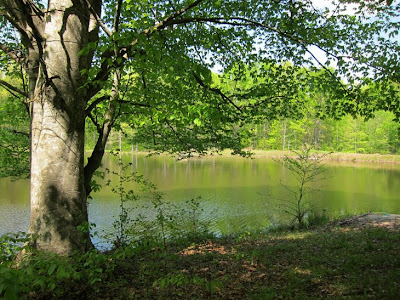 Baker's Branch is an Eden forty-five miles from my front door.

Yesterday I got up early and harvested the first greens from my garden. I was making sandwiches for my father-in-law and myself. We had a special day ahead.

He owns a share of a large and mostly undeveloped piece of land about 45 minutes from town that is divided up like a pie with a pond in the center. The only permanent structure visible from the pond sits on a communally shared tranche. It is a small but beautifully crafted cabin consisting of a porch and a dry sauna.

The routine is always the same: first we heat up and stretch in the wood-stove-heated sauna, then dip in the chilly (though no longer frigid) pond. Afterward we sit on the porch and enjoy the woods, then repeat the cycle four or five times.

The pond occupies a space in my life akin to the Turkish Baths back in New York. We go there to rest and rejuvenate. We sweat out—and I stretch out—the toxins that slowly accumulate in daily life. The pond’s water and its many subtleties inevitably recall Thoroeau. The open spaces, soft treescapes, and primeval purity couldn’t be more different than the delightful skank of the Turkish Bath grotto.

During one of his visits to New York, I took the old man to the Baths and he fully appreciated its many—and consummately urban—charms. Breathing the fresh air and hearing the natural sounds, we reflected on that other place and how we love both places equally well, but in different ways.
Posted by countrymouse at 7:22 AM

I recently attended a seminar at McGuffey for artists about connecting to the outside world. The speaker placed much emphasis on the notion of being ”open for business.” By that she meant being easy to find and employing transparent and consistent business practices. These themes echoed much of what was said in my “artworld as high school” session, so they have been at the front of my mind of late. During my most recent scouting trip to DC, I witnessed two very good examples: one positive and one negative.

The first place I visited was undergoing installation, which usually means a sign in the window and a locked door. Not here: they had propped the art so to be easily visible and I was welcome—specifically invited—to look around. One of the gallery’s co-owners gave me a quick tour and answered my several questions. Although I didn’t know much about the place before, I left the gallery quite impressed and I would be glad to be a part of what they do in the future.

I knew about the second place from multiple encounters at art fairs and I had long admired their program and their unique approach. Despite the obvious handicap of an off-the-beaten-track location in Anacostia, I was intrigued to see their home base, but would end up flummoxed by horrible customer service.

Two red flags that had me leery should have made me think better. First of all, their web site, which is otherwise quite good, includes only driving directions, even though they are a short walk from the Metro. Of course, it’s not in one of the city’s finest neighborhoods, but to outright discourage pedestrian visitors seems foolish. I was wise enough to call before schlepping out there, but not wise enough realize that the answering machine is never a welcoming receptionist—even if it does say that the gallery is open.

Always a glutton for punishment, I made the trip anyway, and it took about two hours from downtown due to a “medical emergency” in the metro system. It was a long journey and I was pretty cranky when I finally got there and found the place dark. There was a sign on the window that said the gallery was open (oh, really?), with a phone number for admittance, which I called. A woman said she would be right down to let me in, I figured she must have been upstairs or something.

Seriously ten minutes passed before someone who looked to be the super from the building next door took pity on me and called her again and received instruction to let me in. The space—and the art—inside was OK, but nothing too special; certainly not worth the hassle. On the way out, two police men who had seen me waiting asked jokingly if I had figured out the magic word.

Apparently, it was not “Open.”

Getting it all down in 150 words

Few prospects are as daunting for an artist—or yield as predictably sub-mediocre results—as writing an artist statement. At one of the #class sessions I attended last month, writer Sarah Schmerler co-crafted a working artist statement for a quasi-volunteer in real-time.

It was an interesting way to lay bare some of the reasons why it can be so difficult, and although there are no easy answers, understanding the obstacles makes them easier to overcome.

Most people reading this blog are aware of my deep appreciation for excellent writing and my consequent disdain for the majority of artist statements, issue of authors who have never studied writing with anywhere near the seriousness of their chosen métiers—if at all.

To be fair though, fixing an artist statement is not just about improving one’s general writing skills. The form is difficult because one must translate into words ideas and emotions that are inherently non-verbal. Writers employ language and artists visuals.

An artist statement must cover a lot of ground. It needs to describe the physical nature of the work, including the size, scale and materials—the what and how. Then it must tackle the more difficult question of why, while placing their specific work in the broader arc of art and civilization.

Every genre has its conventions and an artist statement should really be 150 words or less—far fewer than I have already devoted to this post (we’re currently at the 225 mark). So it is easy to understand why artists are so vexed at the prospect of baring their souls in such a way, and why they understandably fail more often than not.

For my part, I have traditionally ignored the hard word count and simply tried to be relatively concise. Before Sarah and Jen’s session, my statement weighed in around 600 words—four times the recommended length. Clearly I had work to do.

With the goal of creating a more perfect—or at least acceptable—artist statement, I challenged myself to craft something better than before, while being brief enough to honor the 150 word convention. Here’s what I came up with; an ever evolving essay but ready to share.

My drawings, prints, and scratch boards probe the membrane between Earth and sky, terrestrial life and the vast beyond. Tree canopies, silhouetted treelines, and occasional human interferences such as telephone poles act simultaneously as intermediaries and embodiments of the aspiration toward that infinite mystery.

Ranging in scale from tiny to gigantic, and often designed to be presented high on the wall or on the ceiling, they recall childhood afternoons on the grass, gazing upward through a net of foliage, or a glance toward the darkening horizon when it is time to run home for supper.

Our shared affinity with trees predates history, reaching back to primate ancestors who lived among them. Even still, forests and reforestation hold the key to our species’ survival. I can feel that synergy when I work and I’m glad to be part of an endless chain of precedent that will always be contemporary and relevant.