Running in the Neighborhood

People ask me all the time about running in Williamsburg so I thought I would devote an entry to a few resources for runners in the neighborhood.

It's true that 11211 is one of the concrete-ridden zip codes in America. I try to make it my rule to limit the amount of time I spend on the roads and sidewalks and I am very blessed to work right next to Central Park. The lovely track/infield/woodchip loop combo at McCarren Park the gentlest neighborhood option, albeit a boring one as the miles pile up. If you're willing to run on the roads, there are some challenging and scenic routes in the neighborhood, particularly if you include the bridges. (Note: my legs are happiest if I limit the bridges to no more than once or twice a week, which is difficult since I live right next to one).

One of my favorite tricks to run either to- or from- work. I don't carry anything with me on the run (except my keys) and then I carry either my dirty work clothes or a clean set for next time on the following commute. It's a great time saver because it essentially eliminates the time wasted commuting, but it does require some advance planning.

I've mapped out a bunch of my most frequent routes in my running log, which I'm making public. Feel free to poke around and email me questions about the routes or if my training regime confuses you--it fairly unconventional. While you're in there, check out the amazing software I use. It's free and full of great tools and features. I recommend it everyone.

There's a new running club forming in the neighborhood. At long last, someone has taken the initiative to do what a bunch of us have been too busy/lazy/distracted to do so far and display a little bit of leadership. I've pasted an abridged version of their welcome email at the bottom of this post. Of special interest is their schedule for group runs. Running with a group is a very good and very smart way to stay safe, motivated and inspired and if you're trying to get better or just get out the door, I suggest you try to meet up with them.

For my part, I look forward to meeting them and I'll report back when I've managed to do so.

Thanks so much for your email-- nice to hear from you! Turnout is getting consistently better as the word spreads and as the weather is agreeable. There are a lot of people who can't make it to the runs due to work/personal schedules but I've organized a buddy list for people who are want to additionally set up runs with a buddy in their training pace, etc.

Our schedule is below in the midst of all of the scoop on North Brooklyn Runners...

I've been running in this area for a few years now, and running in general for fun and sport for over 10 years. In the past year, I started running more 'fun' runs through NYRR and have been longing for the camaraderie and motivation of having a 'team' to run with. There are plenty of running groups throughout Manhattan and Park Slope-centric Brooklyn, but nothing in our part of town. I'm really excited about bringing together runners in this area, of all fitness and experience levels, who just want perhaps a bit of team spirit, a running buddy, or who want to train for their next half-marathon and want to kick some ass (that's me!). I have this vision that people will find running partners, will share tips about how to run in cold weather, will run races together, and just make new friends! Whatever you're here for, you are very welcome!

North Brooklyn Runners is just getting organized we're just finishing up our fourth week of 'official' group runs. We have a schedule, which is posted on our Google Group (which I just added you as a member so you can read and post). There's about 45 of us so far, which is great, but we could do with some more reaching out-- pass on the word to any other runners you know around here!

The group is made up of all paces and experience levels. Some just want a community to run with, some want to get in shape, others want more group based training opportunities. Several of the group have run marathons, run a lot of half marathons, and some are just hoping to run their first 5 or 10K!

We run the gamut from former elite runners and serious runners to recreational/casual runners, and we like it that way!

Our current schedule is as follows:
Tuesdays 7:30am - Group Run - Meet at the Track
Wednesdays 8pm - Group Run at the Track - incl. warm-up and stretching and then running at your own pace and distance
Thursdays 7:30pm - Speedwork at the Track
Saturdays 9am - Casual Group Run and Coffee - Over the Bridge and back, coffee nearby afterwards

*track workouts meet at the north end (driggs side) of the track by the small lamppost and recycle bins; bridge runs meet at south 5th and roebling footpath entrance to the bridge.

Our turnouts are picking up as we get the word out further and as the weather is getting nicer. We're hoping to add another morning run or two and another evening as well, but need a few more people who are willing to commit to leading one at least for the next 4-6 weeks as we get better established. I'm also organizing a 'running buddy' list for people who want to find other people at their pace to organize runs with-- let me know if you'd like to be added to it!

Currently, we're working on a website, hoping to plan some sort of neighborhood 5K, and have a happy hour "social" in the works for early March-- keep your eyes/ears open!

See the full schedule, and races a few members plan to run, on the Google

I hope you're able to make it out to a run soon!

We're looking forward to meeting you! 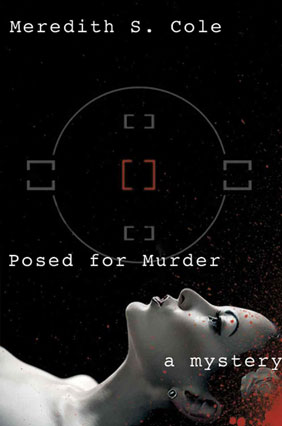 Lydia McKenzie is a Williamsburg-based photographer whose work recreates cold-case murder scenes in the neighborhood. Her first New York solo show awakens a killer who kills McKenzie’s models in a way that gruesomely imitates her photographs. That is the premise of Meredith Cole’s debut novel, Posed for Murder.

This fast-paced mystery is full of hipsters, cigarette-butt-filled loft stair-ways, local coffee joints, smarmy landlords, mafioso-wannabes, bad-Thai, vintage clothing, a Puerto Rican detective that’s too handsome for his own good, and a thousand other hilarious references to the peculiarities that make our neighborhood special. The prose read crisp, quick, and smart as a whip. It’s required reading for all Williamsburgers, Art World denizens or lovers of mystery, mayhem, and contemporary art.

Posed for Murder will have its official Brooklyn launch on March 13 from 7 PM to 9 PM at Open Gallery night in Williamsburg at The Front Room Gallery. Meredith will join Brian Wiprud at Word Bookstore in Greenpoint on March 10 at 7:30 PM for an evening of mystery. Friends of the Williamsburg Public Library is also planning an event (date TBD). The book can be purchased at Spoonbill & Sugartown, Word, retail locations nationwide, and online. More information on Meredith’s website.
Posted by citymouse at 11:23 AM

The other night some friends and I were [inevitably] talking about the economy. Someone noted that one of our artstar friends is really hurting, has to sell one of his houses and is being taken to the cleaners. "Suddenly he's back to being the old X." As opposed to the new artstar X. Of course that got me thinking.

I'm kinds getting back into the old Citymouse/Countrymouse guy myself. Suddenly not having any $ is cool and what a refreshing change. It's like waking from a very boring dream and the sun is shining. I'm cooking yummy things (instead of ordering takeout). I'm entertaining (instead of going out). I'm kicking butt in the studio. I decided not to run Boston (in part for lack of funds) and suddenly I'm kicking @$$ on the track.

Part of me likes this new paradigm. It favors the creative, the agile. I was actually better off before the bubble. And oddly more successful. Now the boom's gone and the old ass-kicking me is cool with that.