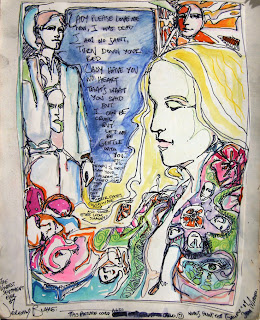 This is the first installment in a three-part remembrance of Jeremy Blake. Jeremy committed suicide this past summer, shortly after losing his long-time partner, Theresa Duncan, also to suicide. Their story, which was documented in all the nation’s major dailies, was skillfully related in the January issue of Vanity Fair. Leaving the biographical task to others, my approach will be much more personal. This entry will describe the considerable influence Jeremy had on me when I met him as a teen-ager. Subsequent missives will review his work and muse on his passing.

“You are a good-hearted and sentimental guy. You remain undaunted.”
--Jeremy Blake in my high school yearbook.

I met Jeremy on the first day of ninth grade French class. I was a huge nerd back then and—worse still—a transfer student from out-of-district. I didn’t know anyone and had, in fact, moments earlier narrowly escaped a severe beating after spilling some vomit-like mushroom soup on a big senior in the cafeteria. Another, even bigger, senior had jumped to my aid, but I was keeping my head down.

I was assigned a seat between a sweet Iranian upperclasswoman and a scruffily-dressed kid with a handful of pens and ink-stained hands. I fit right in; not because I had figured anything out, but because I wasn’t any more befuddled and threatened by my surroundings than my neighbors. Jeremy appealed to me right away because of his constant drawing. My mother is an artist and although she had never pushed me toward her footsteps, there was never any shortage of pencils, paints or crayons—or praise and encouragement. But I had always thought of art as a hobby, not as a career or a life-path.

Jeremy showed me right away that art could be a powerful way to come to grips with an overwhelmingly complex reality and, when necessary, a retreat to an inner experience that was more orderly. He approached his art with a single-mindedness that I had never seen, and which I now know to be a requirement of top-level success in any endeavor from art to sports, politics, scholarship, business—anything. Jeremy drew relentlessly and his unflagging effort combined with his considerable talent to produce results that were simply spectacular from a very early age.

He could draw whatever he wanted, and he did so with wit and a style that was entirely his own. His skill was obvious to everyone. Teachers eventually stopped trying to make him pay attention to their lectures (though he did listen with one ear); girls wanted him to decorate their jean jackets; and every garage band and drama club wanted him to produce their posters. He shared his talents generously and there was never any doubt that he would one day make it. It was pretty special to know for certain at age 14 (when few things sureties existed) that one of my friends would someday become an art-star. That in itself offered a promised exit from the crushing alienation of adolescence.

Jeremy was like a teenager like the rest of us, given to bouts of self-pity, unpredictability, unnecessary meanness, and a reflexive tendency toward revolt. Of course most of it was quite justified, as is typically the case in those difficult years and I later learned that he had perhaps more on his plate than the rest of us. He was a skeptic to the first degree (and beyond) and a psychedelic visionary even back then. He taught me far more about the Grateful Dead and the interpretation of cloud-shapes than he did about the mechanics of art. He was very well informed about politics and his art highlighted many of the unsavory connections from that frightful time that too many others blithely ignore. He could not ignore them and it could not have helped Jeremy to watch the subterfuge deepen and grow more horrific as the years passed. We’ll look at that some more later.

I am really grateful to have met Jeremy because he made me what I am today. He showed me the path toward becoming an artist. Clearly I’m pursing my own unique destiny as a man and artist but he gave me an early push just when I needed it. Now without his beacon I shall endeavor to go forward, undaunted.
Posted by Peter at 1:47 PM