A Challenging Site with Potential 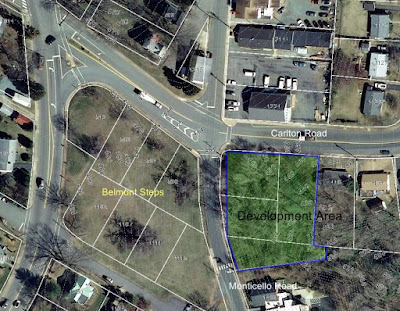 The site is at the SE corner of Monticello and Carlton Roads. (Charlottesville GIS)

The Belmont Carlton Neighborhood Association received a visit from Christopher Henry of Stony Point Design/Build. He was there to talk about an idea—still very much in the preliminary stage—of developing a small cluster of lots totaling about 2/3 acre at the corner of Carlton and Monticello Roads. This blog visited that site a few years ago on a backyard biophilia safari.

Before I go any further, I would like to praise Mr Henry for two things that, should it go forward, will make the project more likely to succeed with the Planning Commission as well as with its future neighbors.

First of all, he obviously read Charlottesville’s Comprehensive Plan and came up with a project that aligns with the City’s goals and values, particularly as respects diverse housing opportunities. Second, and most important, he’s talking early: meeting with planners and listening to the community BEFORE getting invested in a specific execution or set of plans.