Our Children IN DANGER? 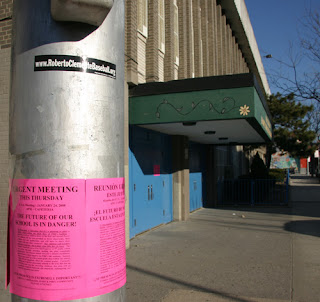 So it’s finally coming to a head.

Sebastian’s pre-k class at P.S. 84 is a portrait of racial harmony, a best-case scenario where all kinds of children from around the neighborhood grow and learn together.

The later grades are an entirely different story, however. Situated in the heart of one of the City’s most rapidly changing neighborhood, where artists have been gathering for 20 years and are now leaving, and where one-bedroom condo price tags routinely surpass seven figures, 84’s demographics skew to a 90+% Latin (read Puerto Rican). The playground outside is a beautiful melting pot, but the school itself is more homogeneous than anything I’ve seen in the South or the White Midwest.

It’s not that the white parents don’t have children: they do. Nor do they send their children to private schools: these are artist-types who believe in the virtues of public education. I know several families who live directly across the street from P.S. 84, yet commute their children an hour or more every day to Manhattan to give them a reasonable education. I’ve worked hard to reduce my own commute and we’ve vowed to never follow the absurd path of taking our child to a whole other county for a public education.

Primary schools are the heart of a community and to give up on the local school is to write off one’s community. And therein lies the rub. Two (or more!) distinct groups live side by side in Williamsburg but they do not interact and in situations where real cooperation is required (like schools) things get very difficult. So P.S. 84 is this Latin enclave and the Latin community wants it to stay that way. Let’s be real: that’s the truth of the matter.

The problems of the school go far beyond its near-total self-segregation, however. I’ll leave for another entry my rants about the saint’s-day processions the school sponsors, or the fact that the PTA uses its treasury to hire a Santa to bring presents to the children. I’ll be generous and say that that stuff has anthropological value and it is undeniably sweet. Far more devastating is the failing performance measure the school recently received from the Board of Education. This is an objective evaluation that rates the school’s progress against its socio-economic peers, so it's not just that it's a difficult school; it's a difficult school that's not doing anything to right itself. Here are a few other failing grades: Great Schools Rating (Graded 1 out of possible 10); Inside Schools

The school’s leadership does not have a plan to correct the problem, which is how the school got into the mess in the first place. In absence of leadership from the school, the Board is required to provide other options in-district for parents—presumably to save parents from making absurd efforts of I’ve described above. So it was apparently announced (though the Board of Ed. denies this) there will be a charter school opening in P.S. 84’s underused third floor (the school is currently 60% capacity).

Reaction from the "community?" Quiet hallelujah’s from the middle class and very public outrage from the school’s PTA. The school was wallpapered with flyers proclaiming a threat to the children’s education and [ominously] safety. Anyone who has read American history should be able to easily decode invocations of "safety" when segregated communities see someone new on the block. There were women outside the school talking to parents (not me, oddly enough!) about the ominous news and telling them to write to their public representatives. Does that mean Sebastian is some alien agent, some kind of one-Booga sleeper cell?

I can well understand the concern of many people who have worked hard to make P.S. 84 reflect their family’s heritage and values. It’s very sweet and I want Sebastian to see it. Where, then, was the outrage when the failing grade was announced? Not a murmur.

My concern is that the school’s principal, who is very much complicit with this explosion of outrage, is creating a diversion from the real issue, which is the school’s performance, and her own inability to improve matters. Principals in more difficult neighboring schools have had success.

By telling the parents that "the Man" is coming to steal their kids’ school, she is invoking one fear that trumps all others for many long-time residents. And they’re buying it. If the school performed better, the neighborhood could have a school that the whole neighborhood could love. It seems that preserving cultural heritage trumps educational achievement in many minds. And the principal is playing into it.

Yet the school will change, one way or the other. The question is whether this latest spat of outrage is a communal coping mechanism or an active effort against the children’s interests that will prolong the school's decline.
Time will tell, and very soon...
Posted by citymouse at 1:54 PM