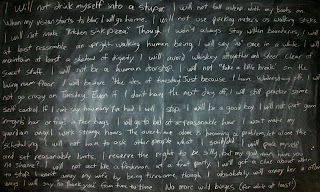 This chalkboard contrition is not really a New Year's resolution, since it was written following a bad night in February. But like the official resolutions, it's been quite effective.

OK. So let’s take a look at my resolutions from 2007 and see how I did. The following list is from a journal entry dated 1/2/07, with commentary from today’s perspective.

Eliminate absurdity, broadly speaking, from my life.
Well, that was ambitious, wasn’t it. I won’t say that there’s no more absurdity, but it’s better. I don’t feel that I’m putting up with absurd life-demands nearly as much as I did. There are still some absurd situations that I’ll tackle one by one.

Shorten Commute.
Check. By running to/from work, I’ve combined two important activities, saving a lot of time. And running is a much more enjoyable way to travel compared to the rush-hour subway. Too bad I can only go one-way (logistically impossible and REALLY far—16-miles RT). And I’ve reduced my number of office days to just two/week. So a big victory there.

Don’t be hard on myself.
Yeah, right. I think I’m pretty patient with myself, though I can always be better.

Get the sunrise/sunset back.
The commute issue unexpectedly solved this one too. And I get up on my studio roof fairly often as well.

No autumn in New York.
It used to really bother me that I missed the fall art season by being so engrossed with the marathon. I’ve managed to become slightly less engrossed, but more importantly, I’ve decided to embrace the marathon as a quintessential New York fall event and that has made a big difference. So that’s better.

Know the difference between boundaries and inhibitions.
Better, much better.

No more albatross art. Make art that’s sized appropriately for the shows I’m having.
So far, so good, though there’s no stopping the creative urge sometimes. I see now that I need to get more, bigger exhibits, as well as making more appropriate art.

Take money career to next level.
Definitely. My work at Road Runners is REALLY interesting and it doesn’t distract from my other lives.

Broaden my [job] client base.
It’s about as big as I can handle now. I’ve decided that I can always find work when I need it. So that’s a strategic shift from last year.

Put one foot in front of the other.
One day at a time, right?

Take a vacation—the kind that’s not about work or family obligations.
Woefully no! But the cabin week was very refreshing.

Get that tatoo.
Not yet. What’s with that? It seems like a simple thing compared to some of the others.

Be a leader, not a follower.
Difficult to measure this one, but I think I’m stepping forward more assertively. I’ll need to keep an eye on this one because it’s very important.

Looking back, most of these issues are about embracing success. That idea seems so simple but it’s extraordinarily difficult. Some people never even seem to try. I’m happy with my effort but not yet satisfied with the results.

One other thing I noticed is that the list is surprisingly long, pretty ambitious, and almost entirely accomplished. Perhaps I’d better revise/upgrade my list for ’08!
Posted by Peter at 2:20 PM