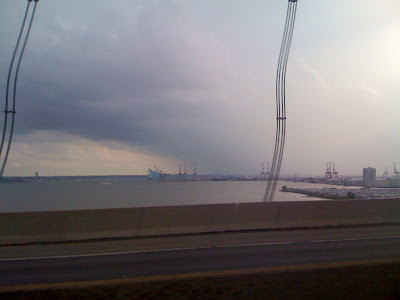 From the window of the Starlight Express. Interesting bending effect from the video grab of my iPhone camera. Reminds me of my own body.

I turned forty last month and suddenly I felt like I was a hundred. One week, I set a personal best at ten miles, two weeks later, a sub-par half-marathon; a week later I couldn’t run a step. My legs felt like gristly hamburger, my body all twisted up, something clearly not right. Running, walking, sitting--it all hurt. I was becoming an ice-bath and ibuprofen junkie and of course not sleeping well. Did Father Time run me down and hamstring me in my flight?

Time for a new approach, one focused on building from the core. A hilarious mix-up landed me accidentally in a yoga class and it seemed exactly right. Balance exercises, pilates, and form-based running drills—I’m taking a broad-front approach and I’m seeing results, but they’ve been slow in coming.

As I write this, I’m wrapping up a trip to New York. Schlepping my baggage around, sleeping on a couch, and being away from routine doesn’t seem like a good way to find balance and alignment. And last night I learned why they call it the City that Never Sleeps. After a fun evening at the Roller Derby, the lads and young ladies wanted to go out and celebrate but I had worked a race that morning so like a dutiful forty-year-old I opted for bed instead. “Long day.” As if in retribution for being so lame, I lay awake for four hours. Maybe I should have gone out.

Well when I woke up a few short hours later, I felt…terrific. I suppose it was a case of quality over quantity. I had a yogi brunch with Anki, a visit with Amelia A, and a stroll through the Lower East Side and saw some great art, feeling better and better throughout the day. By the time I reached the bus, I was doing overhead curls with my suitcase.

What’s gotten into me?

I actually think I got something out. I must have wrestled and bested it as I lay awake last night. It was like a persistent flu bug that lingers for so long that recovery comes as a shock. So this is what it feels like to be well!

If old age steals in like a thief in the night, so does wellness. Or maybe my aches don’t seem so bad compared to what those derby girls must be feeling right about now. Whatever the case, I’m glad to have my body back.

Thanks as always to those who take care of me!
Posted by citymouse at 7:55 PM 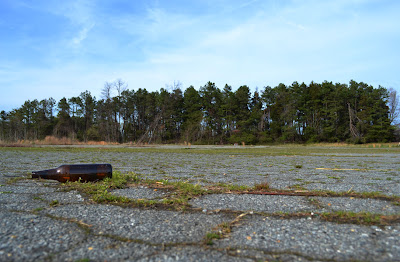 Albemarle Place is a once and future strip mall and now a scene of beautiful decay. It's not far from the show's venue.

When my friend Anna Patchias approached me about having a show at her tutoring business, I wasn’t sure what to say. It’s not a typical venue for an art show and she wouldn’t be offended if I said that the surroundings are not the finest. Let’s just say that they pour their hearts and souls into the instruction and not the office furniture, which is as it should be. Still Anna herself is a terrific persuader and they’re doing terrific work so I figured I would give it a go.

I must say that I’m shocked at how good the work looks in there. I have always advocated placing art in more day-to-day spaces such as schools, waiting rooms, and business offices and this place is all three. The art elevates the room in a way that’s just magical but the venue also places the art directly into the world of the everyday. This body of work, which explores quotidian human places being reclaimed by Nature, could not find a more appropriate home than a shopping center on the edge of town. The show looks good but it also works well.

A good collector challenges an artist to see new possibilities in their own work and that is what Anna has done for me.

Champion Tutoring is located at 2125 Ivy Road (near Food of all Nations) in Charlottesville, VA. The show runs through August.