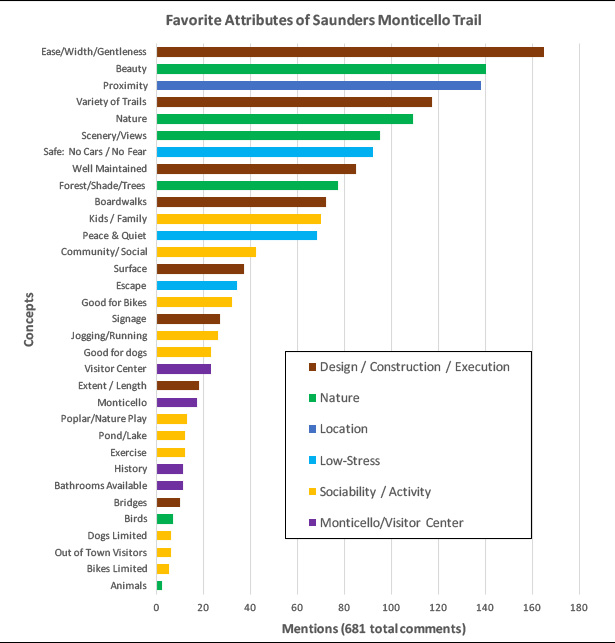 Out of the 1010 survey responses, there were 681 comments of various length. We divided the terms into categories, among which a few key themes emerged. They are summarized, in chart form, above. Here's what they tell us:

Design and Upkeep
The gentle, sloping boardwalks are wildly popular. Users like that they moderate the challenge of climbing a mountain and make the trails accessible to people of all abilities. They like that they’re wide enough to be social, that there are also more rugged options, there is educational signage along the way and they are long enough to merit a trip. The meticulous maintenance is a very significant contributor to the sense of welcome.

Proximity to Where they Live and Work
Exposure to nature in a way that is highly welcoming and close to home completes a triangle that explains the park’s success.

No Cars, No Fear, No Stress
The Saunders Trail is a stress-free environment. Some users talked about safety from cars, others about safety from crime. Most users just used the word “safe” and without context it is impossible to know which version of safety they were referring to. They also see the park as a place to get away from daily life. It would be interesting to follow up with research to know how much (and what kind of) contact with humanity is enough for perception of safety from crime. It is clear, however, that park users value the absence of cars, which is interesting given that the trail was built as part of a parkway project.

Kids, Families, Community and Activities
Even though the trail is a place of natural escape, users still value the social connections that happen there, whether they go with friends or meet acquaintances. The park is designed in such a way to promote positive interaction as well as harmony between active and contemplative uses.

Amenities at the David M. Rubenstein Visitor Center and Monticello Itself
It appears that most Saunders Trail users visit the park as a destination independent of Monticello. A small number did indicate appreciation for the connection to the World Heritage Site and the visitor center as a destination and amenity for the trail.

Implications for a Connector Trail
The overwhelming response to the survey indicates very high demand for a connector.

A large percentage of users are from Charlottesville, the others from urban parts of Albemarle, or from out of state. All of these users would benefit from a connection, and the majority have stated they would use it. Many would leave their cars at home, improving community fitness and reducing stress in the parking lot.

Users are interested in a widely connective network that is both kid- and bike-friendly. Accessibility by public transportation and for the elderly and disabled is important. Destinations near all of the corridors are mentioned, with enthusiasm roughly proportional to proximity. There is strong support for an extension to Highland and Morven, which is not one of the routes studied in this report, but is being addressed independently by Highland and Morven.

Amenities like bathrooms, water fountains, and quality signage are desirable. A fractional minority oppose the trail for fear that more users will spoil the Saunders-Monticello Trail experience, but far more indicated they expect an enlarged network would spread users and reduce crowding.

In order for the trail to be well integrated with the Saunders-Monticello Trail it will need to exhibit the following qualities:
This is an excerpt from the report Charlottesville to Monticello and Beyond. Read the executive summary and download the full report here.
Posted by Peter at 8:45 AM