Movin' on up to the West Side 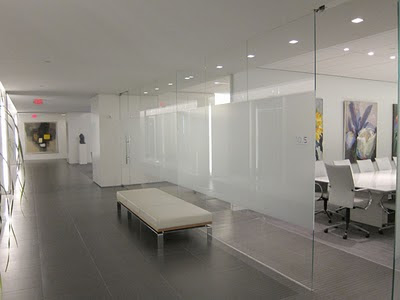 That gray dot in the distance is my 3-foot tall sculpture Niobe. That gives a taste of how vast the new space is, and we're only half-way down this one corridor, of which there are several.

I knew Annette Aaron was up to so something special when she told me that she had news that couldn't be told over the phone. But I was still floored when I learned about the coup she pulled off when she relocated the gallery her mother had established, and where I had shown since the early nineties.

Aaron Gallery was a long-time fixture on the Dupont Circle art scene but the rent has only increased over the past twenty-five years while serious walk-in traffic seriously plummeted during the harsh economic times. Every gallery is feeling the pinch.

Couple that with the headaches that come with prime real estate, such as when a car crashed through her storefront, and Annette was wondering how (or if) she could keep going. Clearly a change was needed, but how?

Moments like those can break us, or--depending on our character--propel us to great things. Annette took the latter course and struck an ingenious deal with one of her commercial clients, one of the nations's leading entertainment law firms.

They would provide her an office and allow her to hang exhibitions in their gorgeous West-End office space, have receptions, and allow visitors through on an appointment basis. This answered several needs at once: it provided a stable, low-cost base for her consultancy operations, which were always far more important than walk-in gallery traffic; it freed her from having to maintain retail-style office hours, and guaranteed a flow of culturally-aware viewers for the gallery's artworks.

The law firm is uplifted by the first-rate curated artwork that now adorns the walls of their public spaces, corridors and several conference rooms. It really looks phenomenal in the light-filled and gorgeously appointed tenth-floor location.

Annette had to make a change, but instead of folding the tent, she did just the opposite: she grew the gallery in a new and spectacular way that will redefine her entire operation and open many new doors. One can only admire the creativity and hope she succeeds.

The Coolest Dude in the Marathon 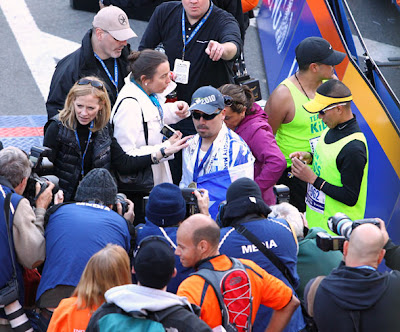 If I do my job properly, you don't see any of this stuff--only what they're seeing through those lenses down below. This shot was taken by our second photographer specifically positioned to capture the overall spectacle from wide (this is a crop so we can see Edison better).
Photo: Errol Anderson, Courtesy New York Road Runners.

Some people are in the spotlight because they are completely mobilized toward getting there. Then, there are those who are renowned for what they have done. Edison Pena (aka the Chilean Miner) is in the second category. Here's a guy who overcame all kinds of adversity and we brought him to New York as a guest so he could bask in some well-deserved attention on the press truck.

That wasn't what he wanted: after running to in the mine to keep his sanity, he wanted to run the Marathon to prove that, in spite of his insufficient training and many hardship, he could do it and that we can too.

The man came to New York with an agenda and we got far more than we bargained for. How fortunate that his message was exactly in line with what we preach all day long. He set the tone for the whole thing and we could not have found a more credible (or it turns out eloquent) spokesman.

Yet another way in which we are so very fortunate: not only do we not have to toil far below the Earth; we have occasional messengers who come up and remind us of what is important and what we are capable of doing if we try. [More Pena Photos | Viral YouTube Elvis Clip]
Posted by citymouse at 6:21 PM 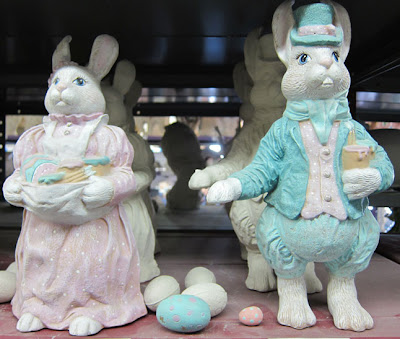 Monticello Road will debut in at the Bridge PAI in the Spring of 2012. The Bridge is the perfect venue for the show not only because it's literally in the front yard but also because we share a fundamental belief about what art can do.

This will be much more than pictures on the wall: it will be a coming-together for the community. There will be story-telling, films, discussions, a childrens's neighborhood walk, hopefully a school program, at least one party, and a discussion series.

This project is larger than me; it belongs to the whole neighborhood and the city. There are many ways to grow the project through collaboration and I'm wide open to suggestions.

For now, there's a small selections of early photographs for the show on Facebook.
Posted by Peter at 10:24 PM