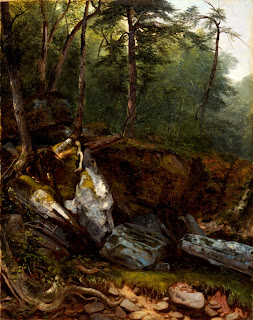 Ironically enough, I couldn't catch the Asher Durand show at the Brooklyn Museum because I was in the Catskills at the time studying the very trees and waterfalls the 19th Century master so lovingly painted.

So it was with great relief that I managed to slip into the Smithsonian Museum of American Art to see the show in Washington, the day before it closed.

In some circles today, Durand is better known for his associations than for his work (witness the fact that the exhibition is organized around his portrait of the more-revered Thomas Cole). In his day however, he was a chef d'ecole, a motivating force for landscape painting and one of the best-known artists of his generation.

It's true that Durand had first-rate chops as a portraitist, apparently painting a dozen presidential portraits. What excites me, though, is that he brings a portraitist's incisive gaze into the landscape, treating plant life and the earth itself as specifically as he can. Though Romantic in temperament, there are none of the generalizations and aesthetic ellipses one usually sees in American Rontanticism. His paintings are not about God or Manifest Destiny, but about the land and trees themselves--and the artist who painted them.

The work lets us each determine its meaning on our own and does not editorialize beyond making evident the artist's love for his subject matter. And yet these are not nature studies either--they're full of emotional weight because they cause the viewer to reflect back inward and our own baggage comes tumbling out.

Durand's spiritual reflections on Nature opened the door for people like me, who use imagery from the natural world to reflect on the Human Condition without resorting to baroque moralizing. Nature is not some agent of God bent on wrecking us, nor is it some unattainable Acadia. It's right there in front of us; it's us. 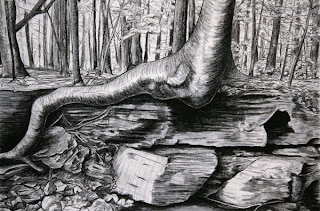 Love Knot. Charcoal on paper 28 x 40 2007. [more]
I had not seen the above painting prior to visiting Platte Clove,
but my debt to Asher Durand is obvious.
Posted by countrymouse at 2:14 PM