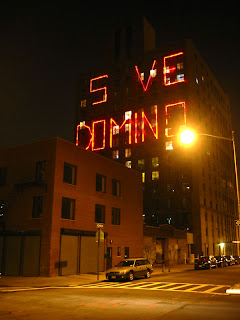 The leader of the faction fighting to keep the high-rises out of Domino Sugar site added a few extra stories to her own historic building when she renovated, to the detriment of the adjoining playground. She understandably would like to protect her view but is that our problem? Is her cause even helpful for the rest of us?

Now I see signs all over the place calling for us all to rise up and "save Grand Street" from a huge condo building slated for the NE corner of Driggs. But what real harm does that project portend? Even the flyer itself only argues for "context." The real concern for the group that is posting the flyers, based in the co-op building across the street is that it will block their view. It will not even really diminish their light because the zoning requires considerable upper-story setbacks, there is a wide avenue in between, and the complainants’ windows face north anyway so a glass tower of the type so in vogue might actually increase their natural light.

So why the fuss? Because that view is a magnificent selling point and its loss will diminish their units’ resale value without reducing their [likely undervaluated] property taxes. I’m sure the view is nice itself as well.

Of course they can and should fight to protect their interests but I don’t have a dog in that fight. I sometimes wonder if those NIMBY-driven battle cries are actually even contrary to my interests. It breaks my heart that we cannot buy a home in New York and will soon probably leave as a consequence. After all, once this apartment leaves the rent stabilization regime (about 5 years), we will not be able to continue renting in the neighborhood. Buying is the only way we can stay long-term.

Loads of new housing stock coming on line can only make spaces more affordable for purchase, even accounting for the strange dynamics of real estate in New York. I am well aware of the downsides, but we must at least consider the benefits. It could well be that my interests are opposite of this particular group of crusaders.

But the disingenuous and prejudicial tone is what really bothers me. It’s like the Boogyman is coming and I’ve been on the other side of that. The talk of "context" is the key.

All of the "Save such-and-such edifice" signs I’ve been seeing around lately remind me of the "Save our school" signs the PS 84 PTA used to block the new neighborhood charter school. They talked about the school’s "context" and "character" but that was code for race. They didn’t have any idea what they were talking about—after all the Board of Education had not finalized any plan. That did not stop them from rallying, holding a press conference, and raising a very passionate ruckus. End result: one fewer option for their (and my) children.

So I’ve been the imagined boogyman and the eventual loser in a NIMBY spat. I’m not sure that blocking the construction of more housing is a winning strategy for my family in this case either. Something to at least consider.
Posted by citymouse at 10:34 PM