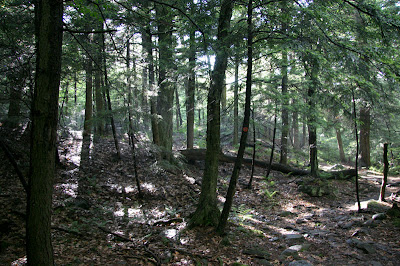 The paths inward are alot scarier than those that lead outward.

In my dreams of ancestors, I imagine patrolling the remote pathways of some dark untamed forest, making them safe for travelers and abandoned orphans who lose themselves there.

As the years have passed, I’ve learned that it’s more complicated because the lost souls actually carry the wolves and witches and dragons within themselves. We’re both villains and victims. And we pose a greater danger to the forest than it does to us. The real danger then is not the darkness around us, but the darkness within.

When I was a kid, I used to like to chase the deer I sometimes encountered while playing in the woods. One time I actually caught one; cornered it in a thicket. I was completely unprepared for what happened next. Instead of fighting, she surrendered. I could have killed with a knife or, I suppose, my teeth. But the hopeless and terrified look in her eyes sent me staggering backward. All sport was gone and I realized how terrifyingly powerful I am. Suffering results when we underestimate our potency.

That was also when I realized that I’m a pretty decent runner.

I just saw the new Beowulf movie. It's horrid but fun. I think we can all agree that the visual effects are just ridiculous—the ultimate expression (so far) of what the motion-capture technique can do. It is however a thoroughly contemporary take on the seed tale of English literature and it doesn't let historical reverence interfere with straightforward story-telling. In spite of myself. I could not help but nod when the old king verbalized exactly what I had been thinking, "The age of heroes and monsters is ended. Now we are the monsters."

Hollywood truism? No doubt, but one that bears repeating over and over, lest we lose the world as we dream complacency and imagine that we are somehow victims.
Posted by countrymouse at 3:16 PM

Hearty handshake in thought my friend.