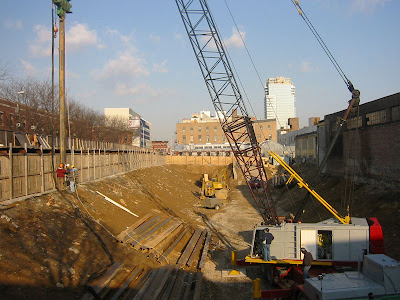 Something's going to fill the block between Bedford, Berry, N3, and N4—but what?

There’s lots of speculation about what’s being built on the super-lot that fills the entire block between Bedford and Driggs and North 3rd and North 4th. From what I hear, the reality is going to be much more sane than the original 40-story plan—last I heard was 5 stories. There is a new wrench in the mix, one that poses an existential crisis that is uniquely Williamsburg.

That’s the rumor around the Met Pool locker room. It must be said that the building is a loooooooong way from complete—I would estimate at least a year—so all bets are off. Still, the notion does cause a quandary for Williamsburgers. It is a national chain—no two ways about that—and this neighborhood does not like and has almost entirely blocked national chain stores (with one minor exception).

Traitor Ho’s (as I call them) may be one that neighborhood long-timers may be inclined to accept. See, in a district with a zillion restaurants, there are shockingly few grocery stores. The two that exist—CTown on South 1st and Tops on North 6th—are ghetto (rotten produce) and corrupt (prices ring differently than what's marked on shelves), respectively. And like the many fancy or fancified bodegas that flourish on both the North and South Side, both retailers are radically over-priced. For example, milk (albeit organic) approaches $10/gallon.

So most Williamsburgers I know ride the subway that oft-quoted "five minutes to Manhattan," stopping at the first available grocery store: Traitor Ho’s. There we find consistent quality and reasonable prices. Plus their offerings are hip and exotic and well suited to the creative type’s idiosyncratic tastes. A neighborhood Joe may be a go.

We need to look at this thing in the larger context of what is happening in the neighborhood. National/International chains are certainly coming. The huge new buildings along the waterfront are slated to include retail footage measuring in the millions of square feet. Few mom-and-pops or boutiques will move into those spaces. Only chains. And the people who actually live in those buildings will most certainly want their starbucks and other suburban trappings. That had better include grocery stores or the the massive influx of people will lead to a food shortage on a scale not seen since the Great Hunger.

The most sensible plan (and the most likely) envisions the shops along the charming blocks around Bedford Avenue remaining low scale and local. The small size of the available spaces makes that outcome likely anyway. Meantime, big stores along Kent Avenue in the big buildings. It’s a delightful compromise for an urban planner and a winning sale for a politician, but I’m not sure I like even this idea.

Doesn’t that just create a microcosm of what killed American Cities? You know the story: Charming downtown; huge stores open on periphery; local stores cannot compete; local stores go out of business; national (but faux- or retro-boutique) chains also move into downtown; sponge away all local color and replace with a Disnified and neutered verion of one's own home town and life experience.

But I would love to have a shorter trip to Traitor Ho’s.

Like so many things about this city, I love the idea and hate it. Passionately and simultaneously.
Posted by citymouse at 10:06 PM