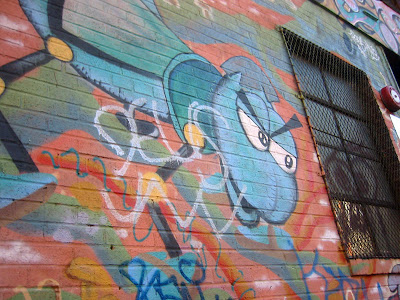 So here are a few notes from the neighborhood.

P.S. 84 PTA Slays Scary Beast of Change
So not only did the inflamed PTA at Sebastian's school block the charter school from opening within the school's walls, they killed it entirely. According the Board of Education, the neighborhood charter school will not open this coming year. One would be justified in wondering if it will ever happen. One fewer option for the children of Williamsburg. To quote the numerous fliers and emails, "Felicidades!"

The school administration has come up with a new idea that certainly will appeal to 84's overwhelmingly Puerto Rican parent body: a Spanish immersion program. Starting in kindergarten next year, two of the classes will be taught in Spanish.

That hits two birds with one stone. Since the arts magnet program is now over, they had to replace it with something innovative. And for a community under siege, what could be more comforting than to know that the local school is actively working to protect their culture?

I have to wonder, though, if it makes sense to teach in Spanish in a school where the failing test scores in reading are attributed to limited English comprehension. Maybe they'll raise test scores by attracting motivated, cosmopolitan parents. My guess, though, is that the plan is designed to appeal more to the "local" parents who do not want their children to to forget where they [the parents] came from.

There is one thing I really love about the idea, however. In this neighborhood so divided between Spanish and Anglo communities, perhaps this could be a bridge. Perhaps this is the school's way of saying, "We belong to both worlds. Not one or the other. Both."

Conicidentally, the PS 84 in Manhattan has already tried this. [NY Times]. I don't have time to do any more than quick reading on the subject but it would be very interesting to see how they did at their school.

Northside Health Food Closing
Citing "Too much competition" from the myriad pricey convenience stores that have popped up in the neighborhood, the owners of the health food shop just north of North 7th Street is having a clearance sale. I love that place so much that I am glad to walk past 8 or 9 of those afore-mentioned food boutiques to get there. I'm sad to see them go and as is so typical in the neighborhood, it is the trail-blazers who are pushed out.

I'm just glad those guys had the foresight to open their amazing falafel joint around the corner on N7. Goodbye Northside. You will be missed. [Foodmonkey bids Northside farewell]

Relocating The Read
I was equally depressed to see The Read shut its doors a few months ago. My sorrow was replaced with joy when I learned that it is reopening on the Southside, right across the street from my house. Woohoo! I love that place and will be so glad to have it a mere stumble away. So that's good news for us.
Posted by citymouse at 10:26 AM