Where are the Pictures? 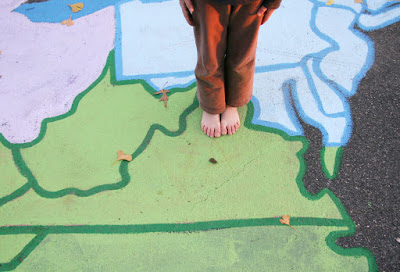 As part of my coursework in Urban and Environmental Planning at the University of Virginia, I am performing a series of GIS (Geographic Information System) analyses of the Monticello Road project. GIS provides empirical data to check (or underscore) what intuition tells us. This is the second of a three-part meta analysis. Previous: Vanishing Landscapes | To Come: Backer Distribution

I often receive process questions about the project, especially as pertains to what parts of the neighborhood I photograph and I how I define the boundaries of the Monticello Road study area. 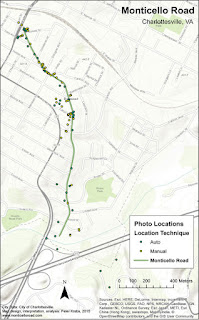 I typically answer that I consciously limit the project to the street and directly-adjacent properties and I believe that the images will be distributed throughout the length of the street—though not evenly, perhaps clustered around my home or a few places where I spend sedentary time. These responses are logical but not empirical. GIS analysis lets us answer the question with data.

Through the life of the project, I have captured thousands of images, which would have been overwhelming. One of the features of photography is that it not particularly relevant if an image is made; what matters is which images are seen.

I have a subset of selects (numbering in the low hundreds) that are used in the book and the frequent slideshows I present. That provides a further curation because it reflects both a photographer’s view of what is visually interesting and an editor’s view of what says something about the place. I refined my selection one more time by eliminating multiple images all taken at the same time (different people at the same party, for example). Through this process, I reduced the sample to 94 images, a highly manageable number, but enough for a meaningful analysis of a linear mile-long space. 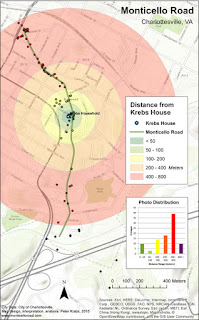 Distance from Krebs Household
My first question was whether the fact that I live in the neighborhood influences where I choose to photograph—do they tend to cluster around my home? There appears to be a small but not particularly significant bias around my house (assuming a fifty meter circle) but most of the images are at least a quarter mile away—and remember the road only extends about half a mile in either direction so that indicates some (but insignificant) clustering near the house. 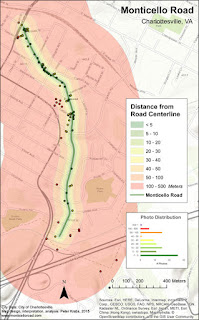 Distance from Street
Next, I wanted to know how much, from a spatial perspective, the road organizes the project. Were the photos primarily taken on the street (within 5 meters of the centerline)? Sidewalk (5-10 meters)? People’s yards/terraces (10-20)? Within at least a block (100 meters)? As is plainly visible in both the map and the chart, a strong plurality of images were captured on the street itself and a vast majority within a single block. 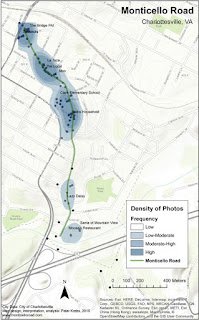 Density
I could see on the Ring Buffer map that there were visual clumps of images and I wanted to know what gravitational force was pulling them together. I postulated that they might be businesses or gathering places where I spend time.

I mapped several of these enterprises with the address locator. Next I ran a kernel density tool and could see that indeed the nodes do cluster around businesses that I frequent.

Going into the project I was concerned that I would pay less attention to areas south of my home because they’re not on my way into town. The second learning from the density analysis is that it is somewhat true but I do also frequent businesses to the south, so while convenience is a factor, so I also seem more comfortable spending time in restaurants and cafes, where I can sit (as opposed to open patches of sidewalk).

Note that the only park on the route (the Clark playground) is a strong node, as well as the informal (and now ex-) open space explored in the previous post.

Conclusion
The Monticello Road project explores the intersection between people and place so if the pictures capture moments of interaction, these maps track where they take place.

Because the project is organized around a roadway, it is not surprising the photos happened on or near the right-of-way. We can see that it is a linear social space and that is an asset beyond transportation.

We can also see periodic nodes where interaction is concentrated. They are spread along the route at short-walk intervals, a key feature that makes the place successful and vital.
Posted by Peter at 12:55 PM