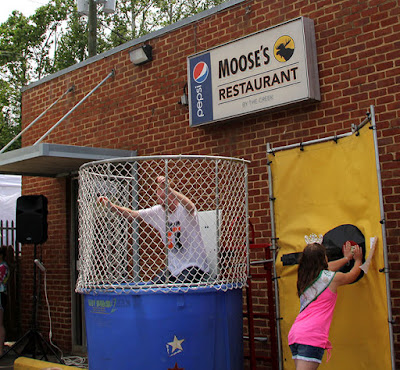 It was impossible to choose a best photo from this event but Ms Dogwood dunking the ex-mayor was typical. [more]

In case you ever needed another reason to go Moose’s Restaurant (and there were already plenty), they just did a super-cool fundraiser for the Shelter for Help in Emergency.

The fun unfolded in three parts. They kicked off on Friday (the 13th) with a doughnut eating contest. Saturday morning (the 14th) they had a block party that included music, dancing, a craft fair, a race car you could touch (and pose with) and—best of all—a dunk tank that was extremely busy. Saturday night was a concert at the Jefferson School. The fundraiser netted $3050 and lots of fun and community fellowship.

When I first visited Moose’s (then called Moore’s Creek) I was afraid to go inside 1) because they share a building with a gun shop and 2) because there were a million police cars parked outside. That seemed like a bad combination, but come to find out that the cruisers were there because it’s the best short-order restaurant in Charlottesville. They all stop there on their way into town or between shifts.


I'm so glad I got past my initial hesitation: that opened a thousand doors and made this project (Monticello Road) what it is. 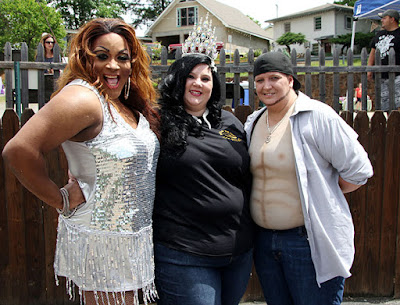 You never know who you'll meet at Moose's: stars of stage, beauty queens, country/western rockers and tons of regular people.

The food is amazing, but the atmosphere inside (which is quite different from the humble exterior) is great and proprietors Moose and Ms Amy set a tremendous tone of mutual respect and shared fun. It might be the only place I’ve ever been where truly EVERYBODY is welcome. Seriously: go there now.

I’ve seen police officers and daredevil race car drivers breaking bread--or rather laying into pancakes and grilled biscuits--together. I bet they go there to reconcile after adjudicating a moving violation.

We’d be in good shape if we had a few more places like Moose’s. They're quiet leaders and have figured out how to solve some of our trickiest problems.

Get a sense of Mooses by visiting their Facebook page. Be sure to peruse their extensive archive of "Moosification" pictures: a who's-who of wise eaters of the region and beyond. Also check out my earlier profile of "Doc" Frazier, a local dirt track hero whose son is now carrying the family torch. Father and son were both were big parts of the domestic violence benefit. Then go eat there!
Posted by Peter at 11:12 AM