As part of my coursework in Urban and Environmental Planning at the University of Virginia, I am performing a series of GIS (Geographic Information System) analyses of the Monticello Road project. GIS provides empirical data to check (or underscore) what intuition tells us. This is the first of a three-part meta analysis. Next: Picture Distribution | To Come: Backer Distribution

Although it is not the main purpose, the Monticello Road project provides undeniable (and sometimes wrenching) evidence of the ways the neighborhood changes over time. The above pairing is especially jarring. We know that frequent low-dose exposure to Nature is beneficial to health and well-being. I suspect that the same can be said of Heritage as well so its loss is something we notice. 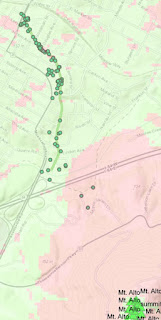 When one of my colleagues saw the above photo, he was surprised to hear that the Neighborhood Association did not oppose the subdivision. In fact, there was nothing for them to say about it because it was done by-right, meaning the land-owner did not need anyone's permission as long as they stayed within the zoning regulations, which they did. Additionally, we say all the time that we like in-fill development (instead of sprawl) and this is what it looks like.

So although this kind of change is inevitable and possibly beneficial, we should not pretend that there is no cost. We know there is, but it is not quantifiable, which is a real liability when we consider the pocket full of financial statistics a developer will present.

GIS allows quantitative viewshed analysis and I thought it would be interesting to look at the cumulative effect of building upon the the landscape and heritage vistas in the neighborhood.

For reference, I chose the peak of Mont Alto, so beautifully framed in the photo above left.


My initial analysis (without buildings or vegetation) shows that prior to development, the landscape would have featured abundant mountain views, as seen in the green areas. (Ignore the green dots, they're photo locations explained in a future post). 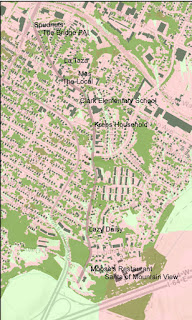 After adding buildings and trees, the view is considerably obscured. The picture is quite grim--unreasonably so, in fact, and a little bit harsher than my experience. In truth, you can still see the mountain from many spots--especially the road itself. In fact, it is the landscape's periodic winking in and out of view that makes the road so visually charming.

The data presented at left is binary in nature--either the mountain is visible or it is not from any given point. But of course human vision doesn't work that way. We edit out obstacles all the time. For example, a tree without leaves will obscure a distant mountain, but we are perfectly capable of seeing them both simultaneously.

So I added a fudge factor to my analysis--an additional two meters of viewer height to allow for standing on a bench, or craning one's neck. I called this transition zone "partial visibility" and the results feel much truer, if still somewhat discouraging.

So what does this tell us? 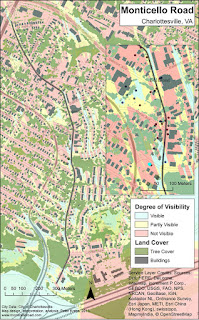 Buildings absolutely diminish the pedestrian's view of the surrounding landscape. It should be noted that my analysis also shows that many of the buildings themselves have excellent views (much better views with a second-story 5 meter fudge factor). This represents a sort of privatization of visual heritage.

Planners, community groups and elected officials have a responsibility to moderate the individual co-optation and hoarding of the public good. That is what democracy and governance are for and viewsheds need to be part of that conversation.

It also plainly shows that besides fresh air and room to run, public spaces such as the Clark playground, the sidewalk itself and the few remaining vacant lots offer an under-appreciated asset: access to views that keep us geographically-oriented and emotionally centered.
Posted by Peter at 12:59 PM