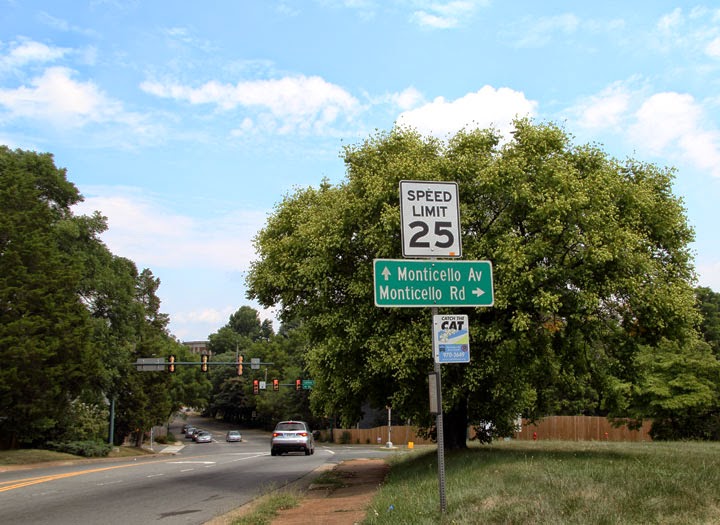 Three roads, each quite different, run parallel through the neighborhood. Belmont Avenue is a quiet residential street. Monticello Avenue (pictured) carries State Route 20 into town. Monticello Road is a hybrid, historic, pathway that predates colonization and is narrow, a little windy and a strangely compelling route for people pedestrian, bikes and autos.

I sat down with Amanda Poncy, Charlottesville's Bike/Pedestrian Coordinator for a conversation about Monticello Road and what makes a successful neighborhood street.

Peter Krebs: I saw you measuring Monticello Road the other day, what were your impressions?

Amanda Poncy: We were looking at some of the curb ramp locations because it is one of the tighter, less accessible routes. Virginia Industries for the Blind is right there so it’s one of the more important places to make accessible. And of course it’s right next to the school as well so we’re trying to provide that accessibility for a range of users of the street.

There are a lot of places that are really tight and the crossings are very tough, especially near the school and Tufton where there’s that blind curve. That’s a challenge and the sidewalks are very narrow, even more so with the utility poles. There’s a sidewalk on the one side but in many areas you have to cross over to get to the sidewalk and it’s definitely a challenge.

Peter: What would you describe as a successful neighborhood street?

Amanda: I feel like Belmont Avenue is a really nice neighborhood street. I was walking down it this morning with my son and it’s nice. You’ve got the parked cars and there’s a nice tree buffer separating the sidewalk. Front porches are on the street so if people are out you’re able to interact and say “hi.” I think all of those things make it a great street—one of the few really great neighborhood streets in Charlottesville.

How do you transpose that onto a road like Monticello Road that’s really constrained? You walk down it and even the sidewalks have a lot of constraints within them. It feels tight and it feels like the cars are traveling faster because the sidewalk is right on the road. The parking is sort of intermittent because some places have off-street parking so the cars parked on the road aren’t as frequent so it just feels like the cars are right on you, whereas on Belmont Avenue they don’t feel that way. 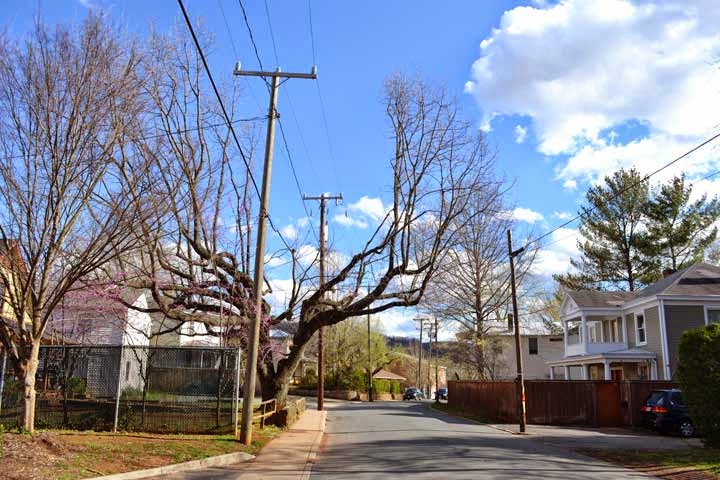 Although a charming place for a stroll, Monticello Road only has contiguous sidewalk on one side, and it is narrow, with many obstructions.

Peter: What about bikes in a mixed-up place like this? How do they fit in?

Amanda: On a neighborhood street, it’s very appropriate for bikes to share the road with a car. If you’ve got a young kid, they may be on the sidewalk while they’re learning to ride but even places like Seattle and Portland some of their backbone routes are neighborhood greenways, where it’s very clear with markings on the road that it’s a shared street. The one challenge with Belmont is that’s very hilly, while it’s doable but it just means you’re not going to have as many kids with so many intersections and such big hills it could be scary for a parent with a kid going uncontrolled down a big hill.

Peter: How about speed? Does a 25 mph driver feel close to the speed of the bike or does that 8-25 differential feel like a big difference to the person on a bike?

Amanda: Yes it really does. There have been a lot of movements around the country—New York is notable—of places going to 20 miles per hour on neighborhood streets. Even less in places in Europe. 12-15 might be more appropriate for a neighborhood street.

Peter: What about interaction between people in different modes? In a successful place you see it all the time in a sense of cars doing the “toot-toot” at people walking down the street—that’s a minimal one. More is when two people are walking down the street and one turns around and they walk off together [laughs]. And then there’s a whole range between the two, many of them cross-modal. Is that cross-modal interaction—in a positive way—something that people talk about in the literature?

Amanda: A successful place allows all those interactions to happen fairly civilly and not create negative interactions. 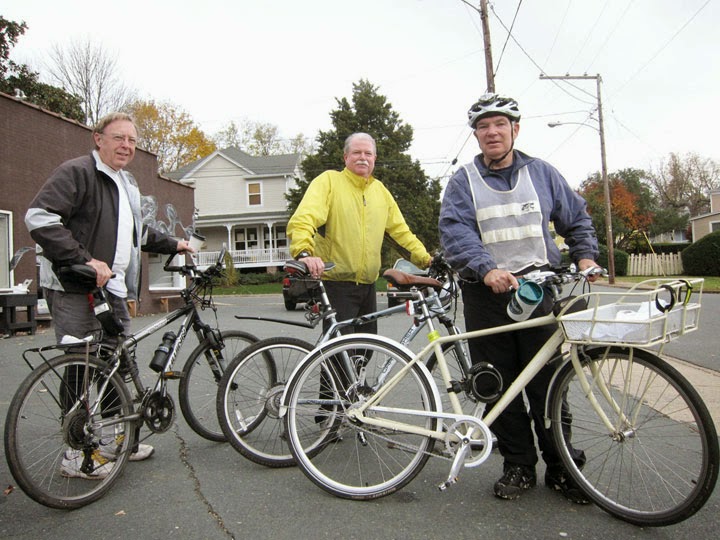 Many, but not all, cyclists favor Monticello Road.

Peter: Monticello Avenue is such a car-friendly route and that grade is so challenging, what about trying to get almost all of the cars onto the avenue and have the road, which is slightly less difficult, be mostly pedestrians, bikes [and local cars]?

Amanda: It definitely is an interesting idea. People have a notion of complete streets where you need to get every mode into one space but there are definite priorities in different spaces so I think the idea that you would prioritize through travel on the avenue because there’s no other appropriate place for it but the fact is that it is a neighborhood street for many people and many of the other side streets are even more challenging just because of the terrain.

There still is that need to have a balance—you can prioritize but it’s about having the behavior you expect. You can have cars on both the avenue and the road but you want drivers to respect everything that’s going on around it.

It makes sense for Monticello Road to be a slower speed just because of the geometry of the road and the sightlines. Monticello Avenue: 25 miles per hour would be appropriate but still able to accommodate other uses.

Charlottesville is challenging because it doesn’t have a grid. Belmont is exceptional that way in that the grid is intact so there are opportunities to go other ways but it comes down to encouraging the behavior that you want because it is still a neighborhood even if it is a regional connection as well. There’s a school right there; it’s doing things to encourage the behavior you want in terms of speed because it would be hard to get people to go one way or another.

Peter: You said that it’s about mutual respect between the different modes—that seems really important. One could understand that someone who is not used to being asked to have that respect could easily feel like they’re being attacked or having something taken away, when they’re simply behaving as they always have. How do you steer that conversation in the direction of respecting our neighbors and not so much about taking from one another?

Amanda: I think it’s a really difficult issue to discuss. Perception is one’s reality and while we’re not trying to take anything away, trying to make roadways more balanced or reminding people of how they are supposed to behave is perceived as such. Ultimately, it’s about respecting people’s choices and upholding individual responsibilities to keep other users safe.

Peter: The more we respect each other, the better we’ll all be…
Posted by Peter at 12:04 PM

I think that because of space Monticello Ave is the go-to ped/ bike lane corridor. City still uses Monticello Rd as emergency path for first responders, adding to the dangerous mix of speeding buses, semi-trailors delivering to the local and Tavola, WE Brown. Speed limit should be ten mph!