A Most Dramatic Welcome 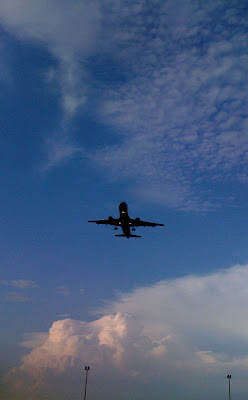 Ever since I lost my Elph, I've been trying my hand at phone photography to fill that spontaneous poloroidesque snapshot role that my SLR can't handle because it's too bulky or not convenient enough. This shot was taken while I was stuck in traffic in Newark,

This is a special moment for the blog: the first time I'm venturing into the City after setting up shop in Virginia. In a way, it's what we've all been waiting for: the CountryMouse gets his turn in the City.

I just got here and need to digest a little bit before I can say how it feels to be back (maybe it's the huge pork burrito I just inhaled?). The return trip was certainly momentous, beautiful and precipitous.

If I had very jumbled feelings about returning to the City that Never Sleeps, it was nothing compared to what was happening in the stratosphere.

Instead of the typical I-95 route, I prefer whenever possible to drive up I-81 through the gorgeous Shenandoah Valley to I-84 through Pennsylvania Dutch country. It's just as fast (if not faster) and so beautiful as to make the trip itself almost a pleasure.

Anyway, it was a perfect summer day with that golden light falling softly over blue mountains, green forests, and tan fields of wheat and mature corn. All the way up, there were huge mounds of storm-bearing clouds to my right, the East, as I traveled North. When I turned East just past Harrisburg, I was exposed to a full-frontal view of a spectacular meteorological show. Those huge anvil clouds let loose in front of me with tons of lightning and black skies beneath the towering thunderheads. Never on me, mind you, always in front of me. It was like a show (or demonstration) set up specifically for me.

As I crossed the Lehigh River and then the Delaware, the most amazing and huge rainbow opened in front of me and stayed there for almost two hours, all the way into New York.

I-84 in New Jersey was a scene of post-apocalyptic destruction. An interstate strewn with huge trees and underpasses so badly flooded I was grateful for the gas-guzzling (but 4WD capable) vehicle I drive. I found out later that tornadoes had passed through.

Nearly out of gas
Posted by countrymouse at 10:35 PM