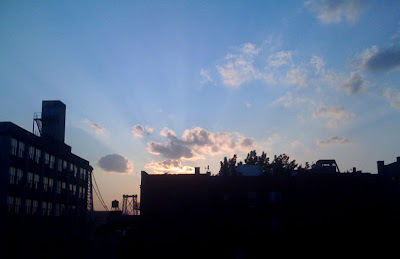 My last post talked about using my cell phone as an at-the-ready replacement for my lost elph. Turns out I'm not alone. One of the blogs I follow on the NY Times (Lens) has an excellent posting about cell-phone photos as an art form with tons of great submissions from readers. This shot is from Amelia & Mark's front window, where I've been staying. Thanks for putting me up guys!

Many people have asked if I feel strange to be back in New York. Same block, same building even! But no, it’s all very straight-forward and like when I lived here it was daily business: eating bagels, riding the subway, working the job I’ve had for ten years, annoying crowds on Bedford Avenue, subterranean studio, navigating (surfing, really!) the City’s complexities. It feels quite normal, really.

What does feel odd is being separated from my family and my home and all its comforts, even if many of them are still packed in boxes. I’m eager to get back to the projects I have begun back in Virginia. But no odd sentimental here-but-gone feeling I would have expected. I felt that way before I moved.

What is strange is the feeling that far more than three weeks have passed since we pulled up the stakes. That’s less time than I usually spend away during the typical summer. Maybe it’s because, as I just mentioned, my heart had moved quite some time ago. Maybe it’s because Time flows at different speeds; Hawking’s proposition that time flows in proportion to a body’s velocity. And my body has been in serious motion.

Interestingly, it’s not just my perception, everyone I talk to says the same thing,

“I can’t believe you only moved three weeks ago!”

I guess I’m living in a singularity.
Posted by citymouse at 8:19 PM