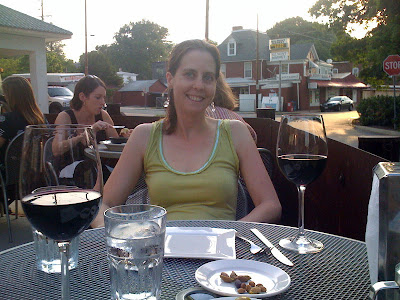 We're starting to feel quite relaxed in our new environment. Note: that glass of wine is not bigger than Meredith's head--it's a trick of photography. We're not that relaxed--yet.

Maybe the best thing about moving to a new place is the joy of exploring a new environment. We‘ve been taking plenty of long walks all around the neighborhood. As a runner, I have an extended range and can poke my head all around the city and some of the environs, which are very runner-friendly. Charlottesville is very hilly and full of surprising little hollows and great views of the surrounding countryside which, at its best, can truly be called idyllic. It’s like the area around Woodstock or the Bay Area (without the ocean).

Like those lovely places, there is a wonderful appreciation for living life well. That means an amazing food scene, lots of great music, amazingly much public art, and a general desire to live life in a creative way. Those strolls around the area have provided plenty of ideas and inspiration in the form of gardens, creative color schemes, and front porches with swings.

I have a terrific studio lined up at the McGuffey Art Center, which is an old school converted into art studios—think PS 1 with studios instead of exhibition spaces (although they have that too). It’s a nice space, subsidized, and within a great community.

My lease starts in September but their board and director have been incredibly accommodating and have found me a subletter until after the marathon. I won’t be able to work there much until then (and residents are required to use the space on a weekly basis). They’ll take care of all the details such as payment. So I’m guaranteed a studio but I effectively start on December 1, which matches perfectly with what I’m doing with my New York Studio. They tell me that it’s because of the strength of my candidacy, which makes me feel pretty good. Perhaps that’s part of the payoff from the dues I paid in New York.

I haven’t really begun to explore the art scene here too much, being so focused on the house and the garden. I’m OK with that actually: I’ve taken a few weeks away from making art and from Road Runners (with occasional check-ins) in favor of setting up my new life in this new place. Hitting the ‘reset’ button is not something one can do too many times, it takes a lot of time and money. It’s perhaps even more rare to have a period of time in which so many of the usual concerns of day-to-day are put on hold in order to allow a real focus on setting things up in a smart way, just the way we want them.

So a few more weeks of intensive installing, gardening, unpacking, and arranging in our little house and yard, subjects of near-future posts.
Posted by countrymouse at 5:59 PM

So glad to hear you guys are doing so well and enjoying the new environs. It sounds like the Portland of the South! Hope the kitties are happier as well. Let me know if NYRR needs an extra hand in November!