Close Encounters of the Obama Kind 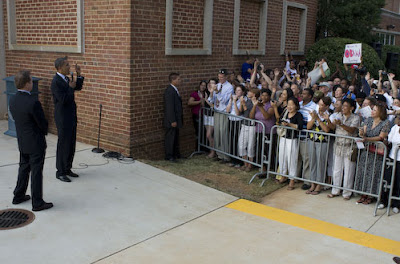 Although we didn't have tickets for Barack's Lynchburg appearance, a group of us took a van ride from VCCA to see the candidate--or at least to see the scene.
There was a huge line of people waiting to get in--very mixed, black, white, old, young, rich, poor. Very friendly, very heartening. Not surprisingly, there were more people than space, so not everyone (ourselves included) got into the auditorium. The secret service set up an outdoor listening area and Barack and Jim Webb came out to apologize personally. My friend Bea got to shake his hand and I was about six feet away.
He looked, sounded, acted exactly the way that we see him on TV. It seems that one reason why he is telegenic and such a star is that his normal appearance and behavior translates well for the media. Some of us photograph better than others and he's enormously blessed in that way.
The speech was great, the usual stuff. It was a great experience--not one I would do every day, but very much worth the time.
Posted by countrymouse at 11:17 AM