Overcoming the Obduracy of the Status Quo 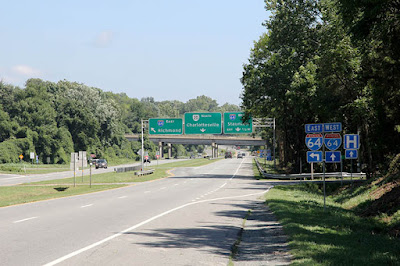 Route 20 was widened and Interstate 64 was built to help people get around, yet they make it difficult and unsafe for pedestrians and cyclists to get to Monticello. Bridging that barrier poses difficulties that are physical, psychological and bureaucratic.

This essay warns that plans to mitigate obdurate and problematic infrastructure can themselves become resistant to input and improvement. Yet, a visioning process that truly listens has the potential create positive change.

Anique Hommels illuminates a fundamental question facing planners who wish to change the world: the built environment—especially infrastructure—has a powerful incumbency that makes it very challenging to displace or modify. Aside from the broader truth that the status quo always has home-field advantage, one must reckon with issues of cost, interdependency with other systems, inconvenience and disruption but also the idea that physical forms shape human processes and thinking.

In my Monticello project, I am trying to find a way to get pedestrians safely past an interstate in general and a cloverleaf interchange in particular. That highway is a powerful fact-on-the ground that cannot be ignored: it is the prevailing reality. There will be costs and perhaps inconvenience associated with rejiggering the ramps to make them safe. However, I foresee a trickier social process problem in convincing the state’s highway engineers to modify their traditional approach—for example by substituting a right-angle turn for a cloverleaf or even adding a new light, crosswalk or stop sign. That’s not how they do things; it’s not in their protocols.


Robert Beauregard also talks about the incumbency effect of infrastructure, which causes the populace to accommodate objects’ needs, rather than the intended converse. He takes a critical next step, reminding planners that their plans—and the environments in which they’re presented—are assertions of power and open to abuse.

A drawing represents a potent stake in the ground through which a designer asserts that a discussion must start here. Not only do elaborate plans demonstrate seriousness and credibility but they imply sunk costs that an efficient mind ought to build upon and not refute or significantly alter. Too many plans and designs become fetishes for their authors that have the effect of constricting—rather than expanding—dialogue. And sometimes that’s even the intent.

Bent Flyvbjerg puzzles over why a smart plan backed with lots of data and clear legislative intent could be thwarted by parochial, “tribal” or “premodern” interest groups who want something different. Because of the advantage stasis usually holds, a powerful constituency can easily defend the status quo from a good plan.

He once tried to respond with more studies, more data, more rationality but over the course of his personal journey he discovered that sound arguments are not enough in themselves. It is better to employ evidence to marshal a coalition to answer power with power. Democracy requires persuasion on a retail level, working from group to group. A position paper is only a tool for that.

When I you put all three authors together, I see an answer to my own question of how to overcome a status quo that is further entrenched by incumbent infrastructure. Plans and designs can offer a vision of an alternate reality alongside the existing for comparison. It can help equalize the discussion between what is and what can be. If the designer or planner is brave enough to modify so that a community may truly own it, they may catalyze a stakeholder movement around a positive alternative vision and bring real force to a negotiation.

We have seen many examples of planners using their drawing board to impose their dreams and visions on the world. We also know that we can be facilitators who help a communities design their own futures. But we must be willing to share the chalk.

Hommels, Anique. 2005 “Studying Obduracy in the City: Toward a Productive Fusion between Technology Studies and Urban Studies,” in Science Technology, and Human Values, 30 (3): 323-351.
Posted by Peter at 8:02 PM