A Visit to the Blue Ridge Sanitarium 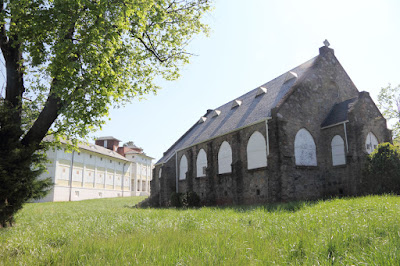 There are many cool places on Monticello Road but this place might be the best. It's mothballed for now, until some truly compelling future use comes about.
In the days before Big Pharma, prescriptions for serious illness routinely called for maximum fresh air dosed out in rural settings. Instead of being connected to beeping machines that make it difficult to sleep with oxygen piped through hoses, patients in country sanitaria rested on screen porches surrounded by birdsong and pastoral views. The current state of the medical arts is moving in that direction but an authentic historical example of the old kind of facility still exists, in a mothballed state, right on the edge of Charlottesville.

The Blue Ridge Hospital occupies a large green triangle between Monticello, Piedmont Virginia Community College and the city’s southern border. The facility’s still-operable back gate opens to a beautiful valley portion of Monticello Road’s historic right of way and as we think about reopening that ghost road for recreation and heritage, the old sanitarium will be an inevitable ponder.


The site is owned by the University of Virginia Foundation and is not open to the public but as a student in Tim Beatley’s Cities+Nature class, I was able to peek behind the curtain. We were following in the footsteps of Dan Bluestone’s 2002 seminar, which developed a heritage-and-nature-sensitive plan for the site. 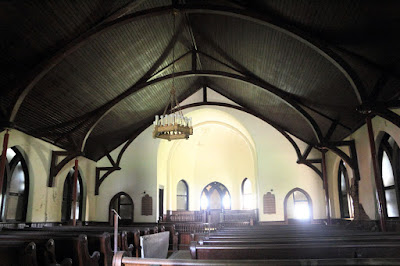 Spiritual practice must have been a huge part of life--for the terminal, the convalescing and the caregivers, who saw so much.

The property is gorgeous. Its well-preserved buildings, open spaces, woods, ancient trees and Piedmont vistas ignite the imagination and it is easily accessible by road, highway or [future] trail. The possibilities are truly breathtaking.

The Foundation is taking tremendous care of the place and it is clear that they appreciate its value. Although there are no plans to do anything with site for a while [likely decades] its condition is akin to a Boticelli in a vault. It's not possible to see anything but succession from the borders but the core is as immaculate as a disused campus can be, with well-trimmed lawns and structures shored against entropy.

When we think of Virginia as commonwealth, it is partly because we value the land in ways that transcend its potential for exploitation. We love its history, its beauty, the way it breathes and sighs and there is an understanding that the place itself is a resource to be shared. As I walked through the grounds, I was reminded what it means to be “land rich” and felt fortunate that this site, which has seen so much and holds so much potential, is simply being held for now by an institution with a Humanist agenda. 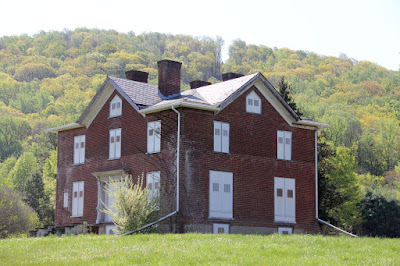 The hospital grew organically from this mansion, which added encircling screen porches, the reason for the large openings, now carefully boarded up. The house itself is reinforced with transverse rods. That's Cater's Mountain in the background. Michie Tavern is among the trees about a third of the way up.

There are many places for hiking and reflection in the surrounding area so although it might be desirable to open this parcel to the public, it’s not really needed for that at this time. Having said that, it’s important that nothing regrettable or difficult to reverse happen there and that seems to be the Foundation’s position for now. Meantime their portfolio is deep enough that they have quite a few development options elsewhere.

We are fortunate that their position is secure enough that they can simply bank an asset like this and it's part of the reason why there is so little sprawl south of Charlottesville. Neighbors like the Presidential Precinct will likely keep it that way. So, the two most-likely outcomes—either continued status quo with the woods sequestering tons of carbon and providing habitat, or some development low-key enough to satisfy Monticello’s viewshed requirements—seem rather positive.

I am grateful to Jeff Riley from the Foundation for the tour and the generous chunk of time he spent with us. I will continue to check in periodically and give updates, with a specific eye toward how the site can continue its historic contribution as a zone that promotes health and wellbeing through access to nature.
Posted by Peter at 3:51 PM

Although the viewshed language is only advisory, there is enough overlap between the UVA and Jefferson Foundations, it seems unlikely that the one would willingly damage the other's interests.

Thank you for your enthusiasm and commitment to linking the past to the present, and future.

This is wonderfully edifying.