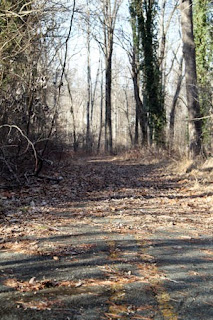 Monticello Road continues hidden and abandoned on the other side of Interstate 64. There is a plan to bridge + tunnel to that right-of-way for safe pedestrian access from Charlottesville to Monticello.

Our friend Michaux, who is a Monticello Road resident and project participant, was the most recent of several people to ask me about the plan to extend Monticello Road to—ahem—Monticello, via multiuse trail.

Such a connection would be a game-changer for the City and the World Heritage Site with a rare grand slam of benefits: health+fitness, access an unusual ecosystem, both social and political history and non-auto connectivity. When I mentioned it to a planner friend the other day he said, “Oh, you won’t have to sell that idea—it’s obvious.”

It's something I've been monitoring and wondering what's up so I reached out to Chris Gensic, Charlottesville’s trail coordinator, who is the author of the idea and an effective champion. Here’s what he said:


We are working now with Monticello and Mr. Dulaney* to secure trail easements needed. Once those are in place, we can pursue the funding (more than $1million) to build a tunnel under 64 and few bridges to connect the old right of way, which would get us to Route 53 at Michie Tavern. Longer term would include a bridge over 53.

My best guess is it will be at least 3 years before the tunnel is in place, if we can get the funding. We will keep plugging away at it!

I was positively surprised to hear that time frame. We’ll keep checking in with Chris and, when the time come, mobilize to support this amazing plan. Hopefully more soon...

* Mr Delaney owns the gas station at the foot of Monticello Road, as well as other surrounding parcels. The route would directly impact his property and probably pass through it.
Posted by Peter at 10:28 AM

Nice shot, looks a bit less than busy road :)
There are plenty places like the one from the photo here in Scotland