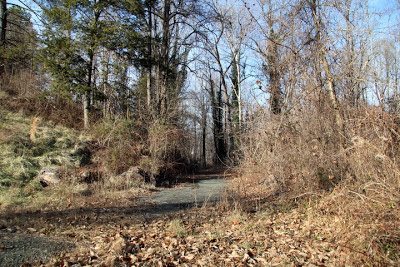 Like an appendix, about a mile of historic Monticello Road still exists, cut off by the Interstate, isolated and now disused. An artifact from the past, it looks like it could have an exciting future. Check back soon for a full photo gallery.

Monticello Road was once a primary entrance to Charlottesville but it was truncated when Interstate 64 was built and replaced by nearby Monticello Avenue in the Sixties. What’s left is the quiet neighborhood street it is today.

I’ve always wondered what traces of the old Monticello Road exist on the other side of the Interstate, out into the country. I’ve crawled through culverts and fought through brambles but never found anything definitive.

A lucky break came when I called Chris Gensic, trails coordinator for Charlottesville for assistance with the cellphone audio tour [more on that soon]. He had an answer and was willing to show me. He also has a plan.

Old Monticello Road crossed Moore’s Creek at its present terminus (bridge abutments still visible), followed the creek for a short ways, then wound through the hills up to the current site of Michie Tavern (it was originally located in Earlysville) then joined VA-53, the current route up to Monticello. In between still exists about a mile of ghost road, completely abandoned and covered with leaves but largely intact. A kick in the leaves reveals a solid yellow line.

Along the way, the road passes through a spectacular successionary ecosystem, largely protected from human intrusion by its very cut-off state. So cut off, in fact, that major trespassing (or acquiring owners' permission as we did) is required to go there.

Interstate builders straightened and rerouted Moore’s Creek to its north flank and diked off an oxbow that is still filled with water and that hosts seasonal waterfowl. There’s a rich and varied understory with particularly abundant ironwood beneath a canopy of mature sycamores and oaks. Archeological traces abound. I can’t wait to revisit the place in the Spring.

If Chris gets his way, we will all get to go there soon. He has an ambitious but surprisingly feasible plan to reconnect with the historic right of way by bridging Moore’s Creek and boring a tunnel under I-64, sweeping the leaves off the old roadway and connecting with the Saunders-Monticello trail, yielding a family/tourist-friendly pathway all the way to Monticello.

This will be a boon for residents and visitors alike and will make available a real treasure for all. In the meantime, it’s a neat little tract: hidden and cut off from both place and time.

This came from amazing archeologist/naturalist Devin Floyd, who accompanied the walk. So great to walk those woods with people who really knew what they were seeing:

The road does pass through a spectacular and varied display of forest succession. There are also remnant trees, echoes of fields and open spaces long ago abandoned (that's what those biggest trees represent).
Posted by Peter at 5:36 PM