Architects Should Listen to their Mothers 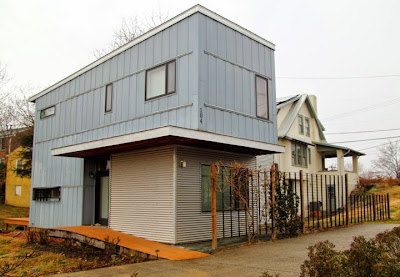 This is a common problem where the old and new meet, but it doesn't need to be.

Charlottesville has been popping up in the New York Times a lot lately—and for mostly unfortunate reasons. The latest breakfast-table surprise was an op-ed piece about high-concept, tone-deaf architecture.

Steven Bingler and Martin Pederesen lament big-A Architecture’s willful disconnect with the public and used a specific case in our fair city as an example. While the whole thing is very well written (you should go read it now and come back) I thought it was great because it offers a solution right at the top—although not explicitly.

It opens with an exchange between an architect and his 88-year-old mother critiquing a house on Elliott Avenue, presumably the one pictured above. The mother thought it looked like a shipping container with some cheap scrap metal shoved against it and completely unconnected to its surroundings, which is true.

The problem isn’t that the layperson lacks understanding of the architects’ vocabulary, it’s the converse. Architects too often show little interest in the site’s heritage and none for the neighborhood vernacular, as if they're annoyances or threats to freedom. If architecture aspires to art or genius status, it must simultaneously sit in the past, present and future. It’s not enough to be bold or forward-looking unless you’re trying to do something that is completely irrelevant, disconnected from what’s on everyone else’s mind—the world of what was and/or is. Context matters.


I’m actually kind of surprised that people so versed in art history would would have this blind spot, now several decades after we thought Modernism had exhausted itself. They’ve apparently taken away the wrong lesson. The problem is not a formal one, as if people got tired of cubes and we now need wavy lines—it’s an attitudinal issue. For someone of my generation, the Modernist rejection of Context feels like a child who simply doesn’t want to do their homework. We want connections and “show your work” no longer means HVAC-on-the-outside or fidelity-to-materials; it’s demonstrable awareness of surroundings, both physical and temporal.

Creativity is fueled by equal measures of expressive freedom and fertile heritage. That way, when we push the envelope, there’s enough to bring the viewer with us. As a keeper of our cultural memory, I could hardly imagine someone better than an (almost) nonagenarian to articulate this point.
Posted by Peter at 10:11 AM