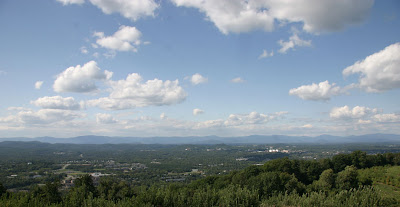 The mist was gone by the time I got home to my camera, but here's a view from the top of one of those mountains, where we hike later in the afternoon.

It is not terribly unusual for me to have near-misses with telephone poles or lampposts while running—usually on account of some super-attractive female going the other direction. On this day, however, I nearly drifted into traffic while ogling a different sort of beauty.

I was finishing up a long run and booking down West Main in Charlottesville, near the railroad bridge. When I topped the rise, I saw the mountains that surround the city all cloaked in high fog, with the sun streaming all around them.

I had been back C-ville for three days and it had done nothing but rain, and this morning started without precip but not entirely promising either. During the course of the run, the Heavens seemed to be mulling their options between bright sun and black clouds.

By the time I hit Main Street though, a decision had been reached: Sun in full force. It would be a glorious day, like the one after Noah’s flood. It was primeval: the mists drawn away from the mountains as curtains from a window. A bright sun was shining through.

Sunday mornings are quiet in Charlottesville—the better to keep one eye fixed on the mountains, needing just one for navigation.

Posted by countrymouse at 7:39 PM