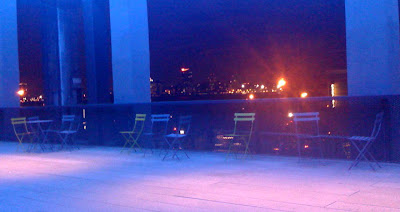 Everywhere I looked I saw work related to my own. When it wasn't the trees, it was the chairs. More invisible connections, more elegies for Arcadia...

On September 10, a horn sounded that was audible only in the Art World and the hounds went abounding over to Chelsea for the season’s first Thursday Gallery Crawl as the annual beacons of light thrust into the sky above Ground Zero

I went to see my friend Simen’s opening at Yossi Milo. It was packed, just like the streets outside. His work re-imagines naturalist taxidermy of the kind one finds in the Natural History Museum. It’s a great show, though far too many of the people there were just sprinting from gallery to gallery and not really looking at any of the art along the way.

It’s true that there was a lot to see, and it would be impossible to more than scratch the surface of an abundant ocean of art. I saw quite a few friends swimming along as well. It was a beautiful evening with an electricity that is reserved for Opening Night and this was the unanimous—if undeclared—premiere of a season of opening nights.

If what I saw was an indication, I will have plenty of company as an artist interested in the Natural World and in trees in particular. I saw very much work quite related to my own. See, for example, this. I’ve been doing it for a long time and I’m no slave to fashion and many of the others would state the same thing. So, we’re working together on something and it’s comforting for an artist to know that he is sawing on a string that has some resonance.

With my love for growing things fully aroused, I figured the best way to close the evening would be to stroll along the High Line, for I had not yet been there. It was just gorgeous but it also gave me a strange sensation that I hadn’t felt since Christo’s Gates. For some reason, it felt like I was in an architectural rendering of the High Line as much as in the actual place. There’s an extreme cleanliness of fabrication as if there’s little--if any--deviation from design to execution. Which begs the question: Why not just look at the designs and save the trip?

I would not go so far as to say that the High Line is not worth the trip, quite the opposite, but the over-the-top (if you’ll pardon the pun) attention the detail in execution seems misplaced to me. The place is supposed to be a garden, a little strip of Nature drawn across the concrete grid of the City. But without disorder, what’s left of Nature?

As I reached my stepping-off point at Fourteenth Street, I caught a glimpse of a short film playing up there on the High Line. It was Andrew Zuckerman’s “Bird,” which shows a series of beautiful and regal birds posed (or perched) in front of a white backdrop. It’s quite lovely, if heartbreakingly clinical. Kind of like the High Line really: a little piece of Nature, brought from someplace else, inserted neatly into a space that is so clean as to be nearly sterile.

If you can get past the American Apparel aesthetic, it is a lovely elegy for the Natural World, and it fit perfectly with the other art I had seen that night. I cannot think of a more fitting way to close the evening and perhaps the most beautiful thing of all is how all the experiences fit together without being coordinated or planned.