To better understand the title of this offering, please click over to Liz Robbins' posting about on-the-run hydration on the New York Times' RunWell blog. 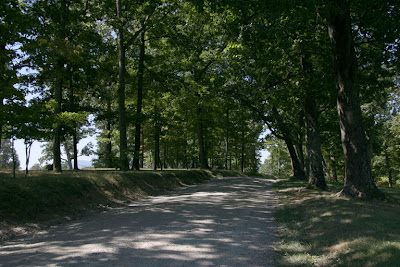 Notwithstanding its porn-star title, Dick Woods Road is a beautiful and wholesome place to run--and a very challenging Long Run.

Maybe it's just the time of year but I feel like I'm living in some kind of Arcadian Paradise. Simple pleasures like the morning run seem simply sublime during these last days of summer. It doesn't hurt of course, that Piedmont Virginia is stunningly beautiful. And the region is living up to its hype as a destination for runners.

Take, for example, my most basic can't-be-bothered-to-think-where-to-go run. It's an eight miler out-and-back that winds up the side of a mountain to Monticello. Half the run is through the lavishly (and expensively) landscaped Saunders-Monticello Trail. That portion is crushed gravel and about a mile of boardwalk, which allows the many seniors in the area to enjoy the Mountain Laurel, Rhododendron, and towering oaks. There is one gnarly interstate cloverleaf to negotiate at peril and a killer hill back to the front door. But on balance, what better way to start a day than a prance through the woods and a sip from the fountain at Thomas Jefferson's place?

That route is one of dozens in my quiver, each with its charms and challenges.

Today I needed a long run and I wanted to try something new, so I rode out to Dick Woods Road, a dirt country lane where the UVA runners like to train. Outrageous. Rolling hills and winding curves through the horse stable, pastures, and pocket woodlands that make this region so special. Up and down it meanders to the very feet of the Blue Ridge--a magnificent backdrop for training. The soft gravel surface leaves the body remarkably ache-free at the end, yet it also adds to the strength required to traverse its length (eight miles out and eight miles back).

All inspired from being quoted in Liz' piece referenced above (yes, I want you to read it), I decided to practice what I preach and stash a fluid bottle at the quarter-way point, which I would revisit and retrieve at the three-quarters point on the way back. That sets up a nice epilogue, quoted straight from my follow-up email to Liz:

So I did a long run today on a breathtaking dirt road that ended right at the toes of the Blue Ridge. On the way back I caught up with a fairly hot female runner and chatted with her for a while as we ran. Soon we pulled up to a crossroad where I had stashed a fluid bottle, I offered her a drink as it's a beautiful but very dry day and we had both already run about 12 miles at that point. Just then, she pulled up short, stooped down and seemingly out of nowhere she produced a bottle of her own from the tall grass alongside the road. We both laughed and went our separate ways (or, rather, paces).

Later, after as I drove back along the course to take pictures (I would not be caught dead running with a camera or cell-phone), I saw her going by in her super-dusty truck, fresh from retrieving her hidden bottle. We both smiled and waved.

All charged up from the lovely symmetry of life, flush from an invigorating run, and delightfully mellow with endorphins and some shockingly good Mexican food I picked up at gas station on the road to Ivy (who would have expected that?), I came home, cranked out this blog entry and am now ready for a delightful day full of beauty and happy surprises.
Posted by countrymouse at 3:05 PM