We know what to do 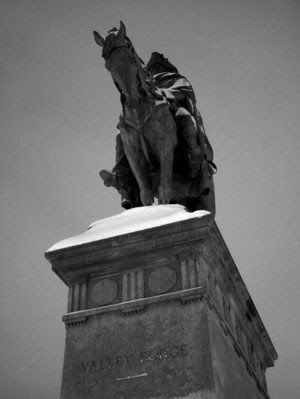 On National Service Day, Sebastian and I braved the snow to clean a park that commemorates the sacrifices at Valley Forge.

With the inauguration of Barack Obama, we wanted to make a special effort to get out and do something on MLK Day, the National Day of Service. Barack put out the call and everyone was answering. We especially wanted to make sure that whatever we did would include Sebastian--he's the real beneficiary.

We went online to sign up and every single job was overbooked. They could probably use some help the other 364 days of the year. Undoubtedly and we may be so inspired on those other days too but I wanted to do something on THIS day. Then the thought came to me like a yell: Open Your Eyes! There's no shortage of work that needs to be done on the South Side.

I pulled on rubber gloves and Sebastian bundled up with his mittens, we grabbed some trash bags and took a walk around the nabe. We hit the "Bridge Plaza Playground" on South 4th and the Continental Army Plaza, two blocks of South 4th and a very unloved block of South 5th under the bridge.

Our work was hampered by the several inches of snow, which concealed much, but did not stop us from filling several contractor bags in about an hour's time. It is very fitting that the next day, the President's Inaugural address recalled that same harsh winter on the banks of the Delaware to remind us of what our ancestors endured for us and the sacrifices that we can/must make for our children.

In the year of America's birth, in the coldest of months, a small band of patriots huddled by dying campfires on the shores of an icy river. The capital was abandoned. The enemy was advancing. The snow was stained with blood. At a moment when the outcome of our revolution was most in doubt, the father of our nation ordered these words be read to the people:

"Let it be told to the future world ... that in the depth of winter, when nothing but hope and virtue could survive...that the city and the country, alarmed at one common danger, came forth to meet (it)."