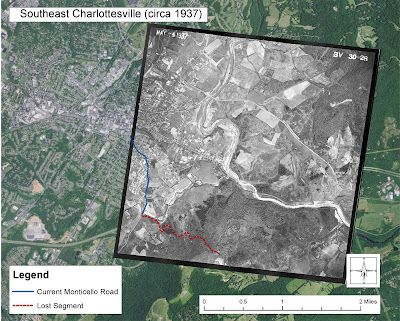 Chris Gensic sent me a set of aerial photos that give us the best idea yet of Monticello Road's historic route, and specifically the course of  the section that is buried under Interstate 64. This 1937 photo predates the construction of Monticello Avenue (the route of which appears on earlier plats)--and it definitely predates I-64. It's interesting that at the time, Monticello and Scottsville Roads were united within the City limits and only diverged after crossing Moore's Creek--that's why it makes a hard left turn.

We were wondering the road's exact relationship to the creek: where it crossed, which bank it followed and precisely where it turned cross-contour. We want to understand that so we can make the most historically authentic connector trail. I georeferenced Chris's photo, then made a shapefile of the old road's course and added it to my database. 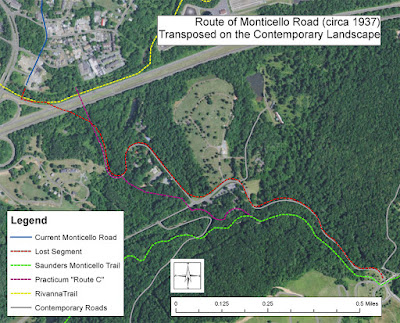 The former course of Monticello Road (red) and some nearby trails, including the connective corridor the Practicum Team studied (purple).

A future trail will not necessarily follow the precise route. Practicalities about crossing the creek and interstate, finding gentle slopes and keeping pedestrians separate from cars will all influence the trail's siting. However, of the four corridors the Practicum Team considered, this one is the truest spatial expression of the City's connection to the Heritage Site. Accurately locating the original road course (at least its early 20th Century incarnation) will help trail planners weave a more multi-faceted trail experience.
Posted by Peter at 9:30 PM