After presenting the Monticello Connectivity report, people asked what I was planning to do next. My answer was often, “Hopefully something like this.” That wish received a nice down-payment when the UVa Foundation’s Morven hired me to work with their staff and two Architecture School interns to study the feasibility of trails at (or to) Morven. Morven borders James Monroe’s Highland and is about two miles from Monticello. There is growing interest in a trail connecting the historic sites, which would vastly extend the connected network we are already developing. 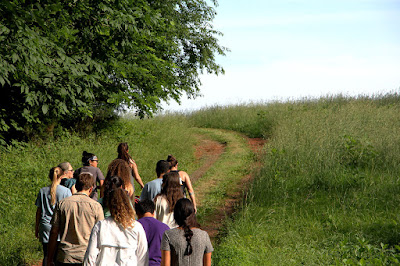 Morven is a 2,913-acre farm bequeathed to the University of Virginia in 2001. Besides hosting a full calendar of events throughout the year, Morven is the site of a Summer sustainability Institute, a Leadership Forum for future African leaders, a forthcoming women’s initiative and the University’s Kitchen Garden. Along with Monticello, Highland, Montpelier, the University of Virginia, the College of William and Mary, Morven is part of the Presidential Precinct. That alliance is mostly programmatic but I’ve long wondered if its alliance could be spatial too, which would open a vast (approx. 6,000 local acre) domain of connected discovery right on Charlottesville’s border.

Morven is less well known than some of its neighbors, but it is equally beautiful and historically fascinating. As part of his effort to gather his friends as neighbors, Thomas Jefferson facilitated the sale of a property known as “Indian Camp” to his friend William Short in 1796. They planned to divide the property into 100-acre tenant farms as an experiment in free yeoman agriculture that Jefferson so often extolled but did not himself practice.

Obviously, that model did not sweep the American South, but it’s a fascinating story with profound implications and many other histories are layered above and below it. Combine them with an incredible landscape and UVa’s forward-looking sustainability program and Morven becomes a multi-layered cultural landscape well worth exploring.


That’s what my team has been doing. We’ve distilled the student research from two courses that featured Morven this past spring (Cultural Landscapes and Conservation Law) into a single beautiful summary report (available at the end of summer). We are also prepping for a charrette taking place after Labor Day.

Trailway-finding
We started with the hypothesis that Morven already has an unrecognized trail network so the first step has been to inventory what’s there. Morven has some walking paths through its gardens, but it also has several miles of low-traffic drives, farm roads and fire roads through its abundant forests.

We located these by driving them with Morven staff and GPS tracking devices we borrowed from UVa’s Scholar’s Lab. These routes can quickly be converted into nearly 15 miles of walkable byways* if they are actively maintained and simple directional signage added. Unmaintained legacy roads also crisscross the property and these can be selectively woven into to the system. I mapped a few of these with a GPS-enabled watch during a bush-wack run and many more await the end of briar season.

We will place all of these on an easy-to-use map that can be distributed to visitors and also be the basis for a larger and more systematic asset inventory by Morven staff and future interns. We will identify what is needed to bring these trails into official service, what it would cost and recommend further steps to improve/extend the network. 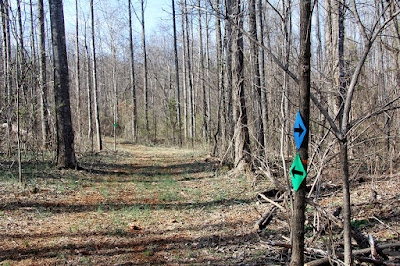 Highland is about to open a trail system similar to what we're proposing.

Connecting with the Neighbors
Just as Morven’s trail network is closer to fruition than one might have thought, it would actually be quite easy to connect to Highland and their new trail network as well. We identified several links that could be put into service without a great deal of effort and without disrupting Morven’s agricultural operations.

Although we are not at this time requesting an everyday connector trail that is open to the public, this route can be used several times a year on a permanent basis to begin building a culture of walking between the sites. As increasingly many people use each of the adjoining, but not officially connected, trail networks (Monticello, Highland, Morven, and potentially Carters Mountain) and see how close together they are, the case will grow to bridge the narrow gaps on an everyday basis. 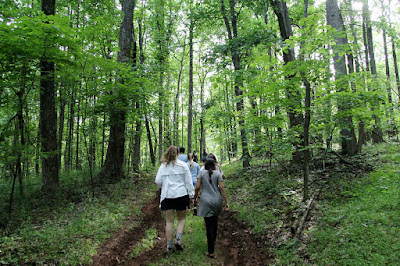 As with the bush-hog trails, several of the forestry roads can become reliable trails will just a little work and maintenance. Others will need to be clawed back from succession.

My biggest takeaway—and I’ve really come to appreciate it through my work with the interns—is that Morven is not just an interesting place in the past and present--it is a zone for active invention. Not only will the trail itself connect points of discovery, the process of getting a trail—and whatever comes next—is a form of active making of new new knowledge. The bequest that gifted Morven to the University specified that its core be used to further the pursuit of learning and my experience has been very much in that spirit.

The process of creating this report has been constant teaching—and learning. There is much collaboration among Morven staff, UVa professors, students, interns and (in my case) recent alumni. The team is learning by doing within a structured and supportive environment. Similarly, although there are established methods for developing trails—which we are studying—we’re also taking a very hands-on trial-and-error approach that hopes to build on, and extend, the research. (A future post will delve more deeply into our somewhat nerdy methods.)

What pleases me most, however, is the personal development I have witnessed on my team—and in myself. We have all learned new skills, both practical and interpersonal but it goes even deeper than that and I will close with one example.

A cup of coffee and a sunrise allowed me to see Morven's landscape in a new light.

Without doubt, the best part of the work so far was when we obtained permission to spend a night camping at Morven. It was fun and we got to see many of the faces Morven presents throughout the 24 hours of the day. But there was something much better. One of our interns, who is from China, had never slept outside, nor walked much under dark skies illuminated only by starlight.

Morven is a beautiful, historic place that is well worth a visit, which is reason enough to develop a set of trails. As part of a Liberal Arts institution, it has a very important role to play in helping students (and those fortunate to work with them) become better, more fully actualized human beings and to do so through shared endeavor.

Although Short and Jefferson’s model did not come to pass in the 19th Century, the 21st brings many exciting possibilities and I believe this project will help bring them closer to fruition.
Posted by Peter at 9:03 AM