The People of Monticello Road: Michael the Mystery Man 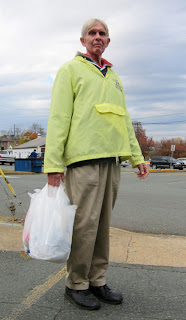 Michael stopped by our second photo booth but he took off before we could get his name.

I wanted to include his photo in the book--how could I not? So we had to track him down to get his name for the caption and the search turned out to be quite illustrative.

I started by talking to local merchants and showing his picture around.

"Oh yeah--I know that guy," was a common response. "I don't know his name but I see him every day."

I put up signs that read, "Do you know this man?" without response.

Last Friday night during open studio hours at McGuffey, as people  looked at the "Faces of Monticello Road" wall of my studio, I received a vital clue.

Some folks from the neighborhood remarked that the plastic bag he always carries is from Kroger, and that he must walk to work there every day.

[Quick aside: It should be noted that Kroger is three or more miles from Belmont and his daily six-mile rain-or-shine round-trip hike is a seriously manly commitment to job, environment, fitness or whatever his reason.]

I went to Kroger the next day and asked the manager if he works there and right away, they said he does, provided an identification, and confirmed the hypothesis.

Problem solved through collective deduction. This project has shown me that the answers to many questions lay hidden (and sometimes in pieces) within a community. Persistent engagement is the key to putting them together.


Monticello Road is a photography and story-telling project about the people and places along a mile-long byway that is simultaneously humble and historic, home to many and a reflection of us all. There will be an exhibition and much more opening April 6. [Details]