The People of Monticello Road: Mas 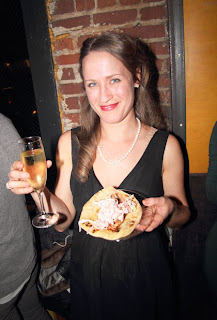 If Clark is where you find the brains of Monticello Road, its palate is at Mas.

I had wanted to photograph there for some time, and had sent postcards and emails but I was too shy to ask directly. Eventually, it was getting silly: Mas had to be in the project because they are a very major piece of the neighborhood and the project would lack legitimacy without them.

So I plucked up some courage, went in and asked. It turns out that Tomas is surprisingly shy too for one so accomplished and he didn’t want the camera probing around, which is not an uncommon or unreasonable position. I told him I understood and sought the sympathy of a glass of Rioja at the bar, which he offered.

When I stopped on the way out to thank Tomas for the wine he said, “You know, there might be a way,” and invited me to Mas’ ninth anniversary party.

It turned out to be full of neighborhood movers-and-shakers and global foodies. I met writers, dentists, actors, chefs, architects, filmmakers and I got to know the staff a little bit—a hard-working and spirited bunch.

Not only is the place usually full of great food and interesting people, but there is an atmosphere of love and generosity that originates with the owner himself. Mas is as much about heart as it is about eating and drinking.

Going there was the perfect way to complete photography for the book (although there will always be more to add) and to move on to the next stage of the project.

Monticello Road is a photography and story-telling project about the people and places along a mile-long byway that is simultaneously humble and historic, home to many and a reflection of us all. There will be an exhibition and much more opening April 6. [Details]