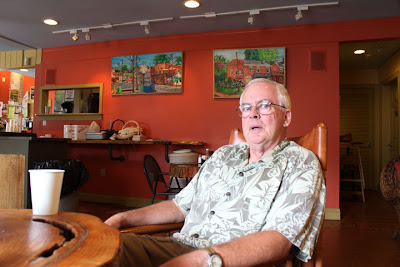 By happy coincidence (or was it?) the painting that brought us together was hanging right there in the cafe. Detail on Jon's site.

My friend Lawrence was in my studio looking at photographs when he recognized his friend Jon Trippel in one of them, painting in plein air. Jon called me the next day and agreed to meet for a coffee.

I had planned it to be a quickie followed by an afternoon photo safari. After two hours with Jon I realized that the journey and the photo session would happen right there in La Taza. 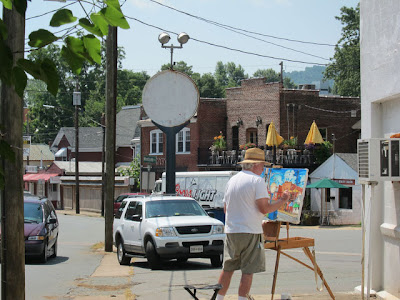 One look at Jon's work reveals an adventuresome spirit and an active mind. Our conversation traveled through some of his many experiences and more than a few subjects which he knows well. His path has not been a straight one but there are some threads that connect it all together, his art chief among them.

As in his life, Jon's paintings are a sum of observations, with each element treated on its own terms and given its due; yet he works equally hard to unify the whole. That tension gives the work its burning life-force and it has motivated his journey thus far.

The People of Monticello Road is a weekly series of profiles that will run through the summer. Monticello Road is a photography and story-telling project about the people and places along a mile-long byway that is simultaneously humble and historic, home to many and a reflection of us all. There will be an exhibition and much more in the Spring of 2012.