When the Furrier Flies 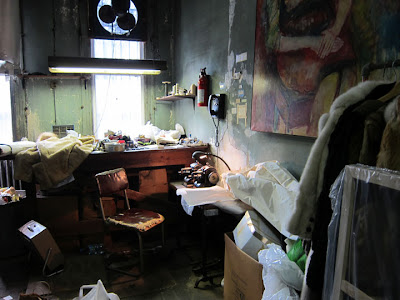 Liz had a Times photographer with her who shot some nice images here using a DSLR but this was an occasion where my S90 was probably a better tool for the job. A high-end point-and-shoot it is very strong in low light but its best feature in an occasion like this is its very humble appearance. No one minded me poking my toy-looking camera around or changed their behavior at all, which is very good in such a emotionally charged, intimate moment.

One of the best things about my job is visiting the myriad people and places along the Marathon route. The reason why it's such a cool event is because it's in New York: home of eccentrics, maniacs, and endless variety.

While she was writing her book about the Marathon, my friend Liz connected with an old man furrier (is there any other kind?) in Greenpoint named Irving Feller. When she heard he was going out of business, she had to make one last visit. She let me tag along.

Liz did a great job of describing Irving's sanctum of solitude, so I won't attempt (and fail) to duplicate her work. Instead I'll just share a few quick impressions.

She and I share a hearty reverence for the bygone and disappearing, the surprising and the gritty; all of these traits are abundant in Irving's musty piles of personal history. I never knew the guy, and I would not exactly call him friendly, but somehow I'm sad to see him go. For all his crankiness he's endearing and he possesses an integrity that demands immediate respect. He's not pretending anything.

Someone asked me what seemed the most valuable and in a room full of sables and minks, I did not hesitate: I went straight to an old dresser completely filled with ballpoint pen drawings Irving executed during the increasingly abundant spare time of a failing businessman and polymath artist. His daughter gave me one and I'll definitely honor it.

The streets of New York are lined with metal gates over storefronts with "For Rent" signs and each shuttered enterprise is someone's dream realized--and ended. What a privilege to be given entree into one such life story! The new is built upon the old, and there is much nourishment to be found in that composting soil.

Irving's place provided plenty of food for inspiration.
Posted by citymouse at 2:33 PM