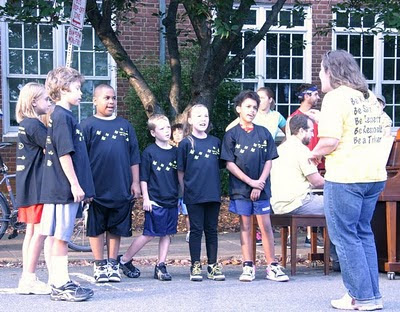 What a weekend of racing! Although it was all about running, this past weekend was a pretty good illustration of my wacky Citymouse/Countrymouse life.

Saturday morning was the Clark Super Achiever Buzz by Belmont, a 5K race that I co-directed. It’s an old-school informal people's race organized by the Clark Elementary PTO to benefit the school and to bring the community together.

It started at 8:00 am, with the Clark 4th Graders singing America the Beautiful. Nothing could have been sweeter: the tinkling piano that we wheeled out into the street, the little voices so soft that we brought the runners way up past the starting line to hear them, the big round of applause as they finished strong.

The race had about a hundred participants—serious runners, families with children, kids in strollers, and the mighty 4th grade Road Warriors, who had spent the night at a lock-in organized by the popular gym teacher Mr. Massie. We didn’t bother with race numbers or a timing system—index cards and tick sheets worked just fine.

It was fun but there was no time to relish success: by 11:00 am I was on a train to New York to work the Continental Airlines Fifth Avenue Mile, which took place Sunday morning.

Now in its 30th year, the Fifth Avenue Mile is one of the world’s greatest races. I can still remember watching it as a kid on Wide World of Sports: the thrill of victory and the agony of defeat…

The event takes all day with thousands of runners in about 20 age-based heats. It takes so long, in fact, that I was able to sleep in, jump into my 35-39 race, run a mile down Fifth Avenue, add 13 more miles along the Hudson and still get back in plenty of time to help manage the later heats.

The last races on the schedule were the Professionals—Olympians, National Champions, and World-Class athletes. We staged the race in a very spectator-friendly way so the crowds were thick and highly energized. The athletes didn’t disappoint: as is typically the case, both the women’s and the men’s races came down to furious sprint finishes, with great and gracious champions winning in fast (but not record) times.

Back to the office for a few hours of editing—I think it took me and our new assistant editor about five hours to process around 10,000 photos and get them on the web. The results were terrific: see some highlights here.

At day’s end, I staggered back to John’s house for what might have been the best part of the day: a nice little dinner party with him, Anki, and our friend Heather.

I slept great and woke the next morning ready to give the world a high-five.
Posted by Peter at 7:34 PM