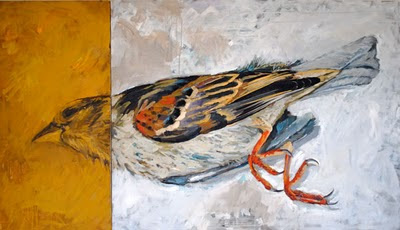 Matt Kleberg. The Transformation Of A Dead Sparrow oil on canvas 48"x84", diptych 2010. Courtesy the artist.

A new studio-mate and new energy—lots more energy, and very positive! I wasn’t unhappy with who I had before but I couldn’t be happier that Matt Kleberg, aka Caballero, has moved into the other side of Studio 28. He’s a great guy, a very talented painter, and he’s cool with Sebastian. So he’s cool with me.

I came up with the nickname when I saw one of his recent paintings of men on horses: Stetsoned and eating plates of messy food on tin plates—cowboys I thought. On second glance, those are vaqueros, which makes perfect sense given Matt’s South Texas provenance.

Recent issue from the University of Virginia, he literally is a Cavalier. We’re visited frequently by a host of men and ladies from his days on the Grounds. But if it’s a posse, it’s a cheerful one, on a mission to support the local artists, which again is alright with me.

The man works as hard as a ranch-hand and has an unaffected modesty that only adds to his charisma. He’ll certainly do well and McGuffey—and Studio 28 in particular—are better for his presence.