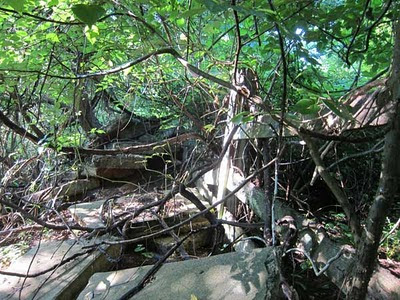 To get to this spot, I had to outrun a security guard in a go-cart, wade through a waist-deep sea of vegetation, cross a stream, and squeeze through a barbed-wire fence. A safari within the boundaries of my town.

Before my Scratch show at McGuffey had even ended, people started asking me what I’m doing next. I have a couple of projects in the early stages, and although I can’t yet say what physical form they will take, I can tell you what I’m thinking about and what I’m looking at.

I’m really interested in the process by which Nature reclaims human spaces. I still love trees and vegetation but rather than looking at the landscape from a distance, I’m starting to really focus on the mechanics of that reclamation. The project will be called Succession and will probably be limited to Virginia ecosystems. The vines and brambles interface beautifully with the state’s abundant human history.

I’ve been hiking and exploring, snooping around (often in places where I shouldn’t!), running from security guards and wildlife, and taking many photographs. I’ll shoot thousands of frames and keep a few from each safari until I have about a hundred images that I really like. I’ll spread them out and see what I find in them. Then I’ll know what to do, what kind of art to make.

I’m still making scratch boards from my considerable image bank but I’m also actively cultivating my inspiration. It’s a very physical search that leaves me with cuts and scrapes, bug bites and some beautiful images.

It’s worth it: blood, sweat and toil makes for better art.
Posted by Peter at 8:33 PM