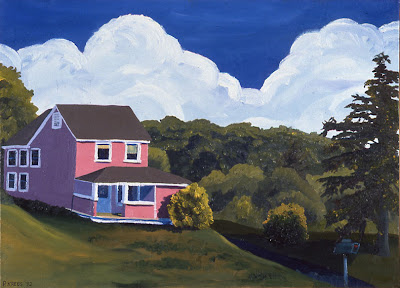 When I was a child the little subdivision where I lived was an island of suburbia in the middle of the country--or at least it seemed that way. In every direction, fields and forests: a small Eden for a boy to explore and proving ground for a thousand childhood fantasies.

I learned to run crosscountry by chasing deer and I found out that I was fast when I caught one. I helped my father chop wood in the autumn and my mother taught me where to find rare wildflowers in the spring. Sledding was an embarrassment of riches and summer was a toy boat in a bubbling stream. Open space and unstructured play with the many children nearby made me the person I am today.

Passing years could be measured in bulldozer tracks as one farm after another was sold, razed, and replaced my more culs-de-sac until only a few parks remained of what had been a pretty wild place. By the time I was in college, the winding country road was a divided highway and you could walk to the Metro. The Real Estate market even claimed a nearby golf course.

By the time I came back from junior year in Europe (1992), only one farm house remained, and it didn't seem long for this world so I did a painting of it, illustrated above, to keep at least some record of how things were before.

All this time later, the pink house is still there. My brother lives in the house where we both grew up and the painting is hanging on his wall. He emailed me the other day with a link to a blog he had found. It was about the pink house.

It turns out the owners are musicians who are methodically restoring the house after a fire in 2005 (now I'm really glad I did the painting!) and blogging about it. The account is extremely detailed and is links the their other, more personal, blog so I've been able to learn quite alot about the pink house and its residents.

Standing in the tall grass in the hot Washington summer and feeling like a vanGogh/Hopper hybrid (I had just been to Arles) I wondered a lot about the people inside and their lives. When I finished the painting I think I went to show it to them and I don't remember if anyone was home.

Thanks to their blog I was able to learn more about them, and now thanks to my blog, they can see the painting.
Posted by countrymouse at 8:06 PM

Thank you so much for writing this beautiful post. I cannot even begin to tell you how deeply touched I am to see this lovely painting of our house in all of its former pink glory. I love that you were in a Van Gogh/Hopper frame of mind when you painted it because that really comes across and I like the way it enhances the "country" aspects of our home.

We bought the house in 1985 and as you so eloquently described, the neighborhood has certainly changed quite a bit since then. I wish I had seen you out there painting that picture, but we were in and out of town quite a bit in those days though so we might have been away at the time.

Would you mind if I did a post about your post on my blog? I would love to include a copy of your painting and a link to your blog, with your permission of course.

Definitely a beautiful post and I have enjoyed the cross references between blogs. Thank you for sharing!