A dark and quiet resting place 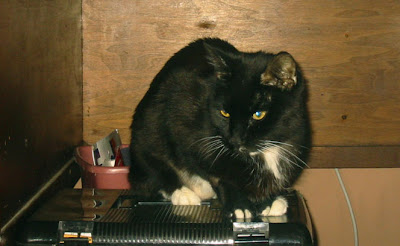 Photo: Sebastian. No one in this world was nicer to Sebastian or more patient with him. They were good friends.

December 6, 2009.
Creepers always had a flair for the dramatic. For the third time, he went on a water-only fast lasting for weeks and weeks, diminishing his body down to a mere shadow. The first time, we dragged him back from Death’s door at the cost of extraordinary effort and lots of money. The second time, he came back on his own. Something was different this time though; we knew he was serious.

He never withdrew from us emotionally, he was pretty cheerful, even as he refused to eat anything whatsoever—not wet food, tuna, anchovy paste--nothing. The other day, he went out for a walkabout, which is pretty rare as winter is gathering. Without any body fat he had a difficult time maintaining heat even indoors next to the heater, in the sun or under the covers so I gasped when Sebastian told me he had gone out. We looked all around for him as the sleet changed into snow. Now, thirty six hours unsurvivable hours later, the signs do not look promising.

They say that freezing is the best way to die. It’s a strangely warm embrace and painless. As cats usually do, he probably wanted to find a dark cave or hollow to return to the Earth quietly. If he will not to come back home, I hope he found some place peaceful to rest.

This entire blog is dedicated to suffering/thriving in the country/city. Since leaving New York, our cats have taken different paths, not necessarily the ones we had expected. Creepers adjusted well to every previous move and was never prone to the anxiety fits that Beevis had. We thought he would adapt well to a slower paced life, particularly the ability to go outside at will. After all, he rushed out of the apartment at every opportunity.

Yet, he never seemed to fully adjust to the new space and our six months in Charlottesville were a slow decline for him. If I had to finger a single decisive moment, it was when the neighbor’s pit bull escaped from the leash and chased Creepers around his own yard. He was never eager to go out again after that…until the end.

We’ll never really know what was wrong with him. His health problems were undeniable and they began in the City. At the same time, he seemed stricken by a malady of the spirit as much as of the body. When people ask me how I adjust to life in Charlottesville, I know how to answer. They sometimes ask about the cats and my response cannot be as pat as it once was. Beevis likes it better and is calmer and healthier. Creepers’ transition might be not have been so easy.

That Citymouse/Countrymouse dialectic must apply to cats as well. CityCat/CountryCat anyone?
Posted by countrymouse at 7:15 PM

It is so heartbreaking to lose a beloved pet. They always seem to know the end is in sight much farther in advance than their owners are willing to accept it. I think it is a gift back when they ease out of life this way. I hope that Creepers found a peaceful place to rest.

Our cat Ted had been through many traumatic experiences as well - both health and household related. He died two years ago and I was still posting about him as recently as this past September. I think I'm done now though. It takes a long time. So sorry for your loss.

I'm just now catching up on your blog. Very sorry to hear about Creepers. But that was one heck of a beautiful post you gave Creepers.