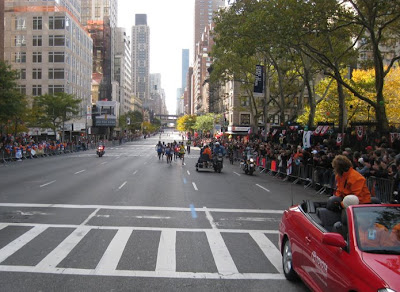 Front-row seat on history. You don't often see wide shots from the photo truck but here's what I see during the marathon. Marilson Gomes dos Santos (yellow) dueled Abderrahim Goumri over the last ten miles and bested him with a blistering kick on Central Park South. Hard to imagine a better way to spend a sunday morning.

You might have wondered where I’ve been these last few weeks. I’ve been swamped in the annual madness that is my day job, the ING New York City Marathon. Such an amazing experience, I can hardly really call it a "job." Every year, when I tell people I’m working on the marathon, they always ask two questions,

Answer: "Well, I run around like crazy but I don’t run in the sense of participating. I’m kinda busy working the event."

I start out on the Verrazano-Narrows Bridge well before dawn, track the race from the photo truck in front of the leaders. Arriving just before the winner crosses the line, I watch the victory lap and then manage the pandamonium that ensues with the awards ceremony. I’ve been at it for eight hours by now and only a handful of the forty thousand have crossed the finish line. I grab a quick breather and then go back as the tired, spent, and hungry masses complete their marathon journey, some triumphant, some seemingly near death, and many just plain peculiar such as the infamous "Larry the Lighthouse."

It’s outrageous: forty thousand people fully blissed out, having achieved something truly monumental, many having overcome enormous doubt. It’s like witnessing forty thousand wedding days and it’s easy to understand why over a million people line the streets every year to cheer them along. That brings me to the inevitable second question people ask when they hear what I do.

"You get paid for that?" Not to say that I don’t earn my paycheck, but I do actually have to pinch myself to remember that I’m doing my job out there. It’s a major rush and a tremendous privilege to be out there. It’s exhausting but it’s amazing, not least because it's the culmination of months of work and at the end of a long sleep-deprived stretch.

And now it’s over for the year and it’s time to go back to being an everyday, working artist kind of guy. It's kind of a letdown actually like the day after Chrismas or some great life change, only accompanied by a physical exhaustion that is akin to having actually run the marathon. Time for some R&R...
Posted by citymouse at 3:36 PM