I’m with the Band: the Art of Jeremy Blake

This is the second installment in a three-part remembrance of my friend, artist Jeremy Blake, who passed away this past summer. The first part recollects when I first met Jeremy in high school and what it meant to me. This piece analyzes his work and the final, forthcoming, missive will muse on his passing.

Jeremy Blake (1971-1997) was the subject of twin retrospectives at the Corcoran Gallery of Art and at Kinz, Tillou + Feigen gallery in New York. Although his oeuvre was truncated sooner than anyone would like, these two shows present an opportunity to take an in-depth look at Jeremy’s work and to place it within a larger framework. Context is indeed essential to understanding his art, not only because he was attempting to create a new form of visual cultural document, but because Culture itself was his chief subject matter.

An Outsider Insider Artist
Jeremy came of age in the Washington DC Indie Scene. Washington DC is a city full of people from other places with big (and most often banal) ideas about how to change society. In response, the natives burrow into a tightly-knit and very self-consciously underground counterculture. Although there is no official membership, this subculture is self-identifying and often quite cliquish. Insider status is of overriding importance in DC, not only in government but, ironically enough, in the counterculture as well.

As is so often the case, musicians are the charismatic touchstones that define the scene. If the inner circle of a band is composed of managers, select roadies, groupies, and producers, Jeremy was part of a second concentric orbit around several DC bands, creating posters, teeshirts, album covers and the like. Jeremy followed this pattern throughout his life, as was most dramatically manifest in his ambiguous and ultimately tragic interaction with the singer/songwriter Beck.

The Corcoran exhibition (entitled Wild Choir: Cinematic Portraits by Jeremy Blake) presents a trio of monumental video portraits of/homages to three great cultural insiders—those who move the landscape of history by wielding tremendous power behind the thrones of fame, who win acclaim through their sheer creativity and brilliance, unsullied by shallow fame and glamour. All three works combine voiceovers with long sequences of video footage and still images (sometimes subtly animated) in a way that resembles a slideshow, screensaver or a tongue-out rock-and-roll version of a PowerPoint presentation. The imagery marries Jeremy’s earlier abstract motion paintings with found/made imagery (drawings, clipart, photographs, and film footage). The visual vocabulary is pretty consistent throughout but what distinguishes each piece from the next is the voice-over, which is the truly collaborative part.

The script for Reading Ossie Clark (2003) is excerpted from the diaries of the late (1942-1996) fashion designer who costumed the British Invasion; Sodium Fox (2005) is a collaboration with poet, rocker and "Gen-X Wiseguy" [wildchoir catalog] David Berman; and unfinished Glitterbest celebrates Malcolm McLaren, Punk Rock’s seminal imroviso. All three subjects were significant figures in the development of popular culture, but they left the role of "frontman" to others. Jeremy’s portraits celebrated figures whose paths toward fame matched his own approach.

Jeremy was a pop artist in the Warhol tradition but instead of painting iconic portraits of Marilyn Monroe, he would have celebrated her stylist, publicist, or whomever actually invented the legend she came to embody. He wasn’t interested in Fame itself, per se. He writes, "I’m not the kind of person who is drawn to fame or who worships fame, in fact I find fame to be a kind of tragic flaw. I’m only really interested in people who continue to take risks even when they’ve been offered the safety of fame." [catalog]

The invisible movers and shakers are free to continue to invent unfettered by the obligations that go with household-name status. Yet these semi-obscure visionaries are known to those who are really plugged into their culture—and that is a consummately Washingtonian line of thinking.

Jeremy Blake. Still from Sodium Fox, 2005 (Kinz, Tillou + Feigen via Corcoran)
The sequence of imagery in Jeremy’s portraits flows is a non-narrative stream of consciousness. What is the thread that connects diverse imagery such as hand-drawn candy hearts and grainy footage of cars going through tunnels? He does not offer an obvious answer and the voiceover often (but not always!) talks about something completely different. At times, it is defiantly obscure.
As with most portraits, these works say at least as much about the artist as they do their subject. In fact, one gets the sense that the subjects are mere launching points for musings on life’s hard questions: love, lust, divinity, and the aforementioned fame and fortune. Jeremy steps from one issue or observation to the next without attempting to define or solve anything. Like most seekers of Truth, he was at a loss to answer the questions he raised.
Still, one cannot escape the urge to look for a thread that stitches together the juicy images and sequences that together form the portraits. Jeremy took those unifying (and hidden) threads gravely seriously. His very first words in the Wild Choir catalog relate a defining moment from his youth when his father facetiously told him that all of Washington’s cultural institutions were connected by invisible tunnels so government functionaries could secretly hoard the nation’s cultural treasures. Jeremy believed it for a while, and actually never seemed to fully reject the story’s metaphorical implications. Bookend that with the bizarre conspiracy theories that ultimately led to his death and you see a soul that lived in a universe stitched together with invisible thread.
Whether or not the universe is friendly or malicious really just comes down to brain chemistry but the desire to untangle the invisible threads is dead-center in the new millenium’s cultural zeitgeist. In this way, Jeremy was plugged into the trunk-line of contemporary thinking. From string theory and its related "dark-matter" to hurricanes caused by butterflies in China and our incandescent desk lamps to the still-unexplained war in Iraq, the complexities of human experience has overwhelmed the old structures that allow us to make sense of them. Yet, one senses that experience does possess a structure of its own, even if it cannot be fully understood. It certainly can be celebrated or criticized though, and that is what the artist ultimately does.
A New Kind of Painting
Jeremy B 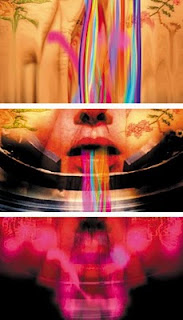 lake. Stills from Reading Ossie Clark, 2003 (Kinz, Tillou + Feigen)
Jeremy’s most important works were experienced as looping video projections on gallery walls or flat screen television monitors, but he rejected the label of "video artist." He saw himself as a painter and he indeed continued making traditional oil paintings throughout. The memorial exhibition at ktf includes one of them. All of Jeremy’s works address the essential elements of painting: composition, color and form, line and shape. He had an extremely sophisticated color sense and he was an accomplished draftsman. All of that is on display in his work. The relationship between the flat screen (or wall) with the three-dimensional world is painterly in Jeremy’s work, not cinotographic or videographic. The images and sequences are meticulously "made," not "taken" or "shot." Thus his works are rightly described as "moving paintings" or, more adroitly, as "motion paintings."
Yet, when presented these are not paintings, they are videos whether Jeremy wanted to call them that or not. Still, even within that ambivalent domain, they are more accomplished than most. Perhaps owing to his very advanced knowledge of music, the works’ tempo is very carefully modulated, without the maladroit clumsiness or repetitiveness one usually encounters when falling asleep in front of (or being intimidated by) the video art one normally encounters in darkened gallery project rooms. In his portraits, the soundtracks are also good as Jeremy lets his great thinker subjects do the talking. Even Mozart let others write his libretti.
This collaboration was a crucial step forward for Jeremy and it moved his work much closer to maturity. The sound behind his earlier non-objective works was anemic at best in comparison to the visual component. For example when watching New Haven (2001), it took a while to realize that a persistent banging and ticking was not coming from the artwork at all but from a radiator in the room. It is never desirable for a work of art to be upstaged by the house plumbing. The introduction of found texts and guest voices blew the work like a fresh wind from adolescence toward mastery. 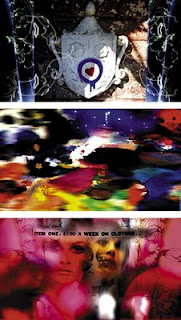 Jeremy Blake. Stills from Reading Ossie Clark, 2003 (Kinz, Tillou + Feigen)
The three portraits, though big steps forward for Jeremy, fail to satisfy in an other interesting way. They attempt to unite his earlier non-objective and purely formal flourishes from his earlier work with representational and photographic images and sequences in a multimedia Rauschenbergian re-load. Paint splashes across photographs or clip-art. Animated psychedelic mists waft from an oversexed model’s candied lips. But the union feels incomplete, hybrid. The interventions seem at times to be commentary about the underlying imagery, but at others they feel very random, as if the artist is playing with multimedia bells and whistles to see what they can do. It seems like an ongoing effort and it would have been interesting to see where he would have gone with it had he lived.
Lost Cause?
Of course one can always speculate about could-have-beens and that is a universal theme in writings about artists who die at a young age. It is clear, however, that Jeremy was deeply engaged in the quest to define a new form of visual presentation, one that is highly appropriate for the world we live in—more so perhaps than the 15th Century tools used by most of his painter contemporaries.
Jeremy had a rare talent and an ambitious agenda: to reinvent painting. His heroes were transformational figures, taste-makers who managed to exert tremendous influence while maintaining complete aesthetic integrity by either artfully dodging the light of celebrity or by redirecting it on others. Whether or not Jeremy could have reconciled both goals is endlessly debatable, as is the question of whether their combined weight contributed to his demise. The pursuit was certainly admirable though and the works of art that it yielded are fascinating, beautiful and full of important questions that elude easy answer.
Posted by Peter at 11:35 AM