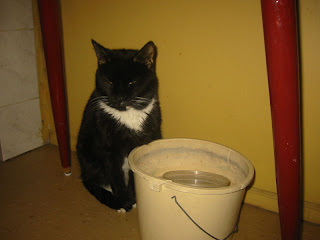 There’s nothing worse than a blog about someone’s pet. They’re never nearly as interesting to the outside reader as they are for the writer. I beg you to make one exception for this story, however. Many people have told me that it’s important to share it.

A few weeks ago, our cat Creepers (famous to readers for his previous run-ins with the &*#%$& squirrel) just seemed to lose his interest in living. We could not figure out why but he lost all his [considerable] mojo and quit eating. He retreated into a cabinet and wouldn’t come out, which was the polar opposite of that outgoing cat’s standard routine. After a while we were sure it wasn’t some kitty version of a flu bug and he was literally wasting away, almost gone. We took him to the vet and they had no idea what had made him stop eating, but they could tell that his liver had stopped functioning. Since he had very little body fat to begin with, his body had started to consume its vital organs, beginning with his liver.

The vet said only two options were possible: off to a kitty hospital for tests and a feeding tube so he could be forcibly fed, or euthanasia. Money’s really tight, so kitty life support is not something we can manage. And he was over ten years old. The vet then looked us in the eye and said "I know where you’re going with this but he’s a good cat with a lot of years ahead of him if we can get the feeding on track."

So we took him to the animal hospital. None of the tests found any ultimate causes but they confirmed the liver thing, installed the feeding tube and wanted observe for several days (at the cost of about a grand a day). It broke our hearts but we couldn’t do that so we took him home.

We resolved to make a good-faith effort to not let him go without a fight but we were not optimistic.

Talk about a hassle. We had to force four big syringes of pudding-like food through a tube into a spirited cat. And we had to do that four times a day--a total of about two hours a day plus prep and cleanup and often required two people at a time. It was exhausting and dispiriting and we figured we would be able to keep it up for about two weeks. At least he was really sweet and relatively docile through the whole thing—or maybe too weak to fight.

After those two weeks, a surprise: he started getting better. Then much better. Now he is completely restored. In fact, as I started writing this, he jumped up from the floor and curled up on my shoulder (one of his many wacky habits). It’s really amazing. Just a few weeks ago, he was literally at death’s door and ready to go. Now he’s back and happy and full of life.

We can still hardly believe it and will think twice before giving up on anything. Or anyone.
Posted by countrymouse at 10:30 PM

Go, Creepers, go! Great story. So glad he made a comeback. Give him a kiss for me.